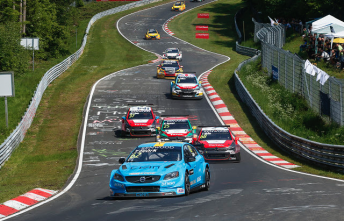 MEDIA RELEASE: Polestar Cyan Racing is heading to Moscow Raceway for the sixth FIA World Touring Car Championship race of 2016 this weekend, meaning half of the races done, following a promising weekend in Germany two weeks ago where Thed Björk challenged for a podium finish.

Björk started third for the first race in Germany at the legendary Nürburgring Nordschleife and had caught the race leader after the first 25-kilometre lap when a technical issue unfortunately put his race to an end.

”We showed that we have pace to challenge for the top and to show that this early in the season is very rewarding,” said Thed Björk.

“Our journey continues this weekend on Moscow Raceway where I have never been before but I am very much looking forward to it to continue moving forward.”

Team mate Fredrik Ekblom scored world championship points in both races in Germany and has so far finished in the points in seven out of ten races.

”I am never pleased until I am on top of the podium. But the main thing so far is that we have been in the points in the majority of the races, promising for a strong second half of our first WTCC season,” said Fredrik Ekblom.

”We have reached a level where we begin to understand the car, something that gives our team and drivers confidence to push for race results,” said Alexander Murdzevski Schedvin, Head of Motorsport at Polestar.

Yet we are continuously heading for new tracks where we have no data. Confidence is good, but it is also a challenge to remain realistic and don’t forget the importance this year’s data collection has in the long term.”

The WTCC weekend in Moscow starts with testing on Friday, practice and qualifying on Saturday and two races on Sunday, both broadcasted live on Eurosport.