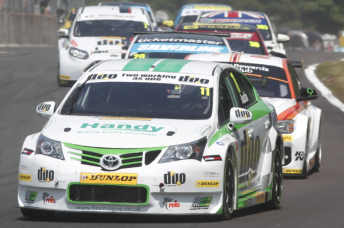 Off the back of strong preparation prior to qualifying on Saturday, June 4, confidence of a possible season-best performance for Austin in the grid-determining run was high and, had the session gone to plan, a top 10 placing was a strong likelihood.

In the end, despite being just 0.7 seconds shy of pole position, the Pershore driver had to begin race one from 19th place on the grid but he did battle his way into the outright points-paying top 15 and was in a great position to challenge for the top 10 in race two – until lap six retirement with damage.

Race three was the toughest challenge, from 30th on the grid, but Austin impressed on the Soft compound Dunlop tyres to gain no fewer than 14 positions and only just miss out on another overall points result in the No.11 Toyota Avensis.

“We know we had the pace in qualifying to be in the top 10, had the lap gone smoothly, and we had a good race car but with so much to do in the races Rob had another very big challenge.

“Getting into the points in race one was great but race two was a massive disappointment, Rob definitely had the chance to be in the top 10.

“He did everything he could on the Soft tyre in race three, almost made it into the points, but overall it’s been another frustrating weekend for us and a case of what might have been.”

Having missed out on a top 10 starting slot for round 10 by a mere 0.3 seconds, the pace was undoubtedly there and at the beginning of the race, under glorious summer skies, Austin looked eager to make early gains.

Grabbing two positions on lap one, he was elbowed back again to 19th but had regained the lost ground by lap three.

After rising into 16th place, he challenged the Mercedes of Aiden Moffat for 15th position at the chicane on lap five and produced a sensational piece of driving to grab the place after running side-by-side with the Scottish driver for half a lap – showcasing the bold racing Austin is renowned for.

Moving alongside on the run up Clay Hill, Austin stayed wheel-to-wheel on the outside line, all the way through the double right-hander at Druids and into Lodge corner.

Staying on the outside through the turn into Deer Leap, he edged ahead over the line and brilliantly sealed the place.

On the eighth tour, contact from one of the Honda Civics dropped the Handy Toyota Avensis to 16th place but Austin was able to break back into the top 15 on the final lap at the expense of the MG of Ashley Sutton.

From the eighth row of the grid in round 11, Austin again made a good start to gain places but in the braking zone for the hairpin a concertina effect resulted in contact which caused heavy damage to the front of the Toyota.

Able to continue, Austin held 11th position and after a brief one lap Safety Car period the action resumed on the third tour.

Fending off the Subaru of James Cole, both then fell victim to the BMW of Rob Collard so Austin slipped to 12th place but he continued to keep the Subaru at bay until race officials showed the black and orange flag to the Handy driver due to the damaged bodywork. Pitting at the end of lap six, retirement duly followed.

Austin, therefore, had another huge task on his hands in the final race of the weekend to try and salvage anything from 30th on the grid but he produced an excellent performance on the Soft tyres to carve his way through into 16th place at the conclusion – just 0.8 seconds outside the top 15.

Gaining no fewer than five positions on lap one alone, he had broken into the top 20 midway through lap eight and continued to make great progress.

With four laps to go Austin held 19th place and after taking 18th spot he then moved into 17th with two and a half laps to go.

As a result of a puncture for Gordon Shedden, he then took 16th position as he headed into the final lap.

There are just two weeks to wait until the fifth race meeting of the BTCC season, the halfway point of the campaign, at Croft Circuit in North Yorkshire on 18th/19th June.