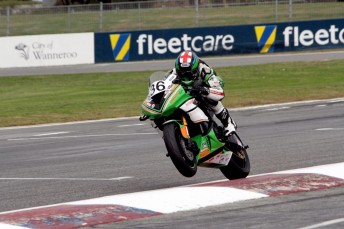 With only days until the next instalment of the 2016 Yamaha Motor Finance Australian Superbike Championship presented by Motul Pirelli, Western Australian local and Motul Supersport competitor Sam Clarke is preparing to converge on Barbagallo Raceway for round four this weekend, June 3-5.

Not only is Clarke fun and full of life, his speed on the track is undeniable against a tightly packed Motul Supersport field, with only six points separating second placed Clarke from the championship points leader with three rounds of racing to go.

Although only young, Clarke is already working full time to support his dream, and while it is hard at work, his focus is on racing. Clarke shared his thoughts and expectations, whilst in preparation to defend his home turf this weekend at round four.

“Every round I have felt as though I have had a target on my back, and now for the Supersport competitors to come to my home track to compete, the target is even bigger,” Clarke said.

“My expectations for myself are high, I am fast around my home track, but I have never raced any of these boys around Barbagallo before, they could pull something out the bag and surprise everyone.

Clarke also spoke about his surprise performance so far this season, competing for the first time in the national series on a 600cc Supersport machine, and proving his dominance in the class from the first round with impressive results.

“I am surprised by how well I have done so far this season. I think the biggest thing that is helping me to get good results is the fact that I am enjoying racing this year,” he said.

“The fact that I am not just riding at the Barbagallo circuit all the time now, and I get to experience new tracks along with other competitive riders, is why I think I am enjoying it so much more this year.

“This year when we go racing I have time off work, I am a lot more relaxed over the race weekend, and just being able to enjoy the sport makes such a difference to my riding.” Clarke concluded.

Like any young motorcycle racer, the goal is to win but level headed Clarke has his eyes firmly set on taking this year one step at a time, but a career in motorcycle racing isn’t out of the question for this Kawasaki mounted athlete.

“I want this to be a career for me, I don’t want to work six days a week in the mud every day!” Clarke confirmed.

“I am hoping that I can get something out of it. My plans are to focus and take it one step at a time – we don’t want to get too cocky so we are just enjoying every moment.

“Hopefully this year we can win the Australian title and then from there we’re not sure. I am hoping to maybe have the opportunity to head overseas, but I want to be dominant in Australia and know that I am at my peak in Australia before I head overseas.” Clarke concluded.

For the first and only time this season, Western Australian Clarke will avoid the travel interstate as he prepares for the fourth round of the 2016 Yamaha Motor Finance Australian Superbike Championship presented by Motul Pirelli this weekend, June 3-5when it heads to Barbagallo Raceway in Western Australia.

For more information of the ASBK championship, or to keep up do date with the results over the weekend head to www.asbk.com.au.