Wilde fourth while Markovic bows out at National Capital Rally

Wilde fourth while Markovic bows out at National Capital Rally 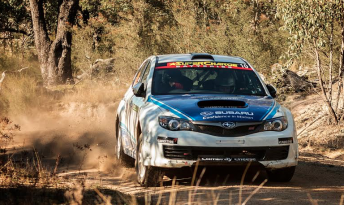 MEDIA RELEASE: Maximum Motorsport’s Tom Wilde has finished an impressive equal fourth outright in the National Capital Rally in Canberra at the weekend.

The WA driver also claimed equal highest points of the registered Australian Rally Championship (ARC) drivers, winning the round on a time count back.

The 28 year old set consistently fast stage times throughout the event and was able to avoid the mechanical issues and off-road adventures that plagued other competitors.

“We were the only frontrunners to have a faultless run and that’s a testament to Maximum Motorsport’s car preparation,” Wilde said. “The only thing we did was a little bit of cosmetic damage when I ran a little wide on a corner.”

Wilde was joined in his Subaru WRX STI by a new co-driver for the event, Sydney’s Sam Hill, and the pair just clicked.

“When we first got in the car, we gelled straight away,” Wilde said. “This rally is pretty difficult, so to finish so well, especially with a new co-driver, is pretty exciting.”

Wilde was equal fourth with Molly Taylor, also in a Subaru WRX STI, and the pair were involved in some inspiring battles throughout the rally.

“We have some great battles over the weekend,” Wilde said. “At the end of Heat Two, we wanted to try to beat her, but we didn’t want to push too hard and do any damage.”

“We ended up taking nine seconds off her in the final stage and finished just 0.4 seconds behind her overall.”

Wilde’s focus is now set on round three of the ARC, the International Rally of Queensland (IROQ) in less than three weeks.

“I’ve done that rally three times before. I know that one better than I know Canberra,” he said.

Maximum Motorsport teammate Brad Markovic will seek redemption at IROQ after making the heartbreaking decision to retire from the National Capital Rally following a series of suspension problems.

Competing in a newly-acquired Subaru WRX STI, the WA driver said he was ‘gutted’ to exit the rally, especially after his team’s mammoth effort to get to Canberra.

In the space of just five weeks, they found and prepared a new Subaru WRX STI after his previous car was destroyed by a freak fire at the Quit Forest Rally.

In a somewhat eerie turn of events, fire also destroyed a competitor’s car at the National Capital Rally with Markovic and co-driver Glenn Macneall first on the scene.

Tasmanian driver Craig Brooks’ car was engulfed by flames following a major crash. He and his co-driver were unhurt, but Markovic was shaken by the incident saying: “Seeing that messed me around a bit.”

Ultimately though, it was the ongoing suspension issues that led to Markovic’s exit.

“We tried a mixed suspension setup, using a set of front suspension we have as spares to try and combat the problem, but it didn’t feel good,” he said.

“In Heat Two, the car was all over the place on the first stage. We made the decision that it was getting too dangerous to drive. It struggled under braking and wasn’t stable.”

While Markovic was disappointed to be on the National Capital Rally’s retirement list, he said: “Really it was a result just to be in Canberra. The team worked tirelessly to get us here.”