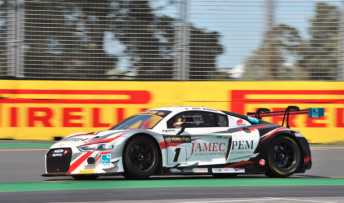 Bates received the invitation to fill in for Geoff Emery, a former team-mate of Bates in the Commodore Cup and V8 Supercars Development Series, who was injured in a crash in the previous AGT round at Barbagallo.

“Obviously it’s not an ideal circumstance to get this sort of opportunity, and I wish Geoff all the very best with his recovery, but at the same time I’m really excited to get behind the wheel of this amazing car,” Bates said.

Bates tested at Phillip Island last week in preparation for the event and was blown away by the capabilities of Audi’s latest specification R8 LMS GT3.

“What an incredible car!” he said.

“Obviously I’ve driven some awesome cars in my career but this is something else.

“You can carry so much mid-corner speed and Phillip Island is a perfect track for it, but there’s also the ABS and traction control so it’s very technologically advanced and just gives you so much confidence.”

This weekend’s event doubles as Round 4 of the Australian GT Championship and Round 1 of the CAMS Australian Endurance Championship, and includes a pair of one-hour races on Saturday followed by a 101 lap endurance race on Sunday which is expected to last around three hours.

Bates will share the Audi Sport Customer Racing Audi, prepared by Melbourne Performance Centre, with Spanish driver Miguel Molina who is a factory Audi driver in the DTM Series.

“It’s a great opportunity to share a car with an Audi factory driver, and my objective is to be competitive with the other “Am” drivers and hand the car over to Miguel on the lead lap and in a competitive position so he can fight with the “Pro” drivers in the final stint,” Bates said.

“Sunday’s race is very long and there is a chance of some variable weather conditions, so strategy will be absolutely critical and it will be important to be on the right tyres at the right time.

“Hopefully we can have a good run and finish somewhere near the front at the end of the day.”