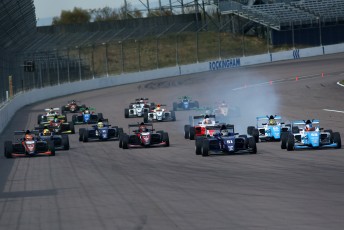 MEDIA RELEASE: The BRDC British Formula 3 Championship heads to the undulating and challenging Oulton Park circuit in Cheshire this bank holiday weekend (28-30 May) for rounds 10, 11 and 12 of the 2016 season.

A 21-car field will tackle the 2.69-mile International Circuit and will co-headline the meeting, which sees one race on Saturday before a double-header on Bank Holiday Monday in front of big crowds, alongside the British GT Championship.

Carlin’s Ricky Collard currently heads the overall standings on 186 points after taking his maiden BRDC British F3 success at Rockingham last time out, a victory which helped him move ahead of Lanan Racing’s Toby Sowery, a fellow McLaren Autosport BRDC Award finalist in 2015.

Sowery suffered a testing weekend in Northamptonshire, with the meeting yielding a best result of sixth, and the 19-year-old will now be aiming to close the 22-point gap to championship leader Collard at Oulton Park.

Just one point behind Sowery sits Brazilian Matheus Leist, who already has two BRDC British F3 victories to his name in 2016.

A further three points adrift of the Double R Racing man is Australian Thomas Randle, who has also shown he has race-winning pace as he stormed from fifth to first in race two at Rockingham to record his maiden success in the category.

Further back, Finnish racer Aleksanteri Huovinen has shown he can compete at the front and has stepped on to the podium this year, whilst former standings leader Enaam Ahmed will be hoping to vault himself back into title contention at Oulton Park and move up from seventh overall.

Sean Walkinshaw Racing’s Thomas Maxwell has been a model of consistency, finishing every race but one so far in the top-10, and he currently occupies eighth spot, just two points ahead of South African Sisa Ngebulana.

Fortec Motorsports Tarun Reddy fills the final position in the current top-10 and he will also be one to watch, with the Indian’s current best result a runner-up finish at Brands Hatch.

There will also be one new face on the grid at Oulton Park as Bahraini driver Ali Al Khalifa steps up to BRDC British F3 from Italian F4, and will line-up for the successful Hillspeed team.

Qualifying at Oulton Park on Saturday gets underway at 11:10 with the 14-lap first race starting at 15:20.

Monday’s racing action begins at 09:55 with the second encounter of the weekend before the third and final race in Cheshire, which is scheduled for 18 laps, takes place at 14:05.

As always, you can watch all the action from the weekend through the one-hour long highlights programme which is broadcast on ITV4 one week after the meeting.