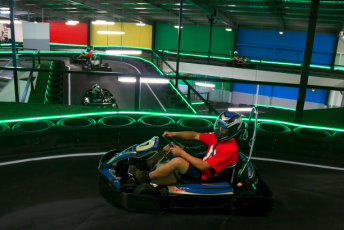 MEDIA RELEASE: The indoor go kart racing game has changed forever, with Slideways opening their latest venue on the Gold Coast, with the facility featuring a world leading layout spread over an incredible three levels.

With experience in the market stretching over 30 years, Slideways has emerged as the market leader in South-East Queensland following the development of a chain of unique hire go kart race tracks.

The new facility at 10 Spencer Road Nerang is 1.4km north of the previous Go Karting Gold Coast venue on the same road, and enjoys easy access off the adjacent M1 while still being only 15 minutes from Surfers Paradise.

The 465 metre long European style circuit features an exciting combination of indoor and outdoor track, ramps connecting the three levels, sweepers, straights and hairpins, and when combined with a specially prepared track surface, racers can drift at speeds of up to 70km/h, a trademark of Slideways’ indoor venues.

Bespoke track lighting around the circuit keeps drivers informed of race conditions, while all karts are digitally timed to within 0.001 of a second, which is integrated with the Slideways phone app that stores personal race data.

Mr Wilson is the President of the Australian Concessional Hire Kart Association, as voted by his industry peers.

“We have always provided our customers with the ultimate go karting experience, but this new venue takes us to a world leading level in terms of racing experience,” said Mr Wilson.

“At our previous Gold Coast circuit, we innovated with our massive 55 metre long cross over bridge, but by expanding on the engineering lessons we learned from there, we have been able to take the concept to the next level.

“People will be blown away by how we have been able to construct a track that is three levels high; the elevation changes throughout the circuit are completely unlike anything else you would experience anywhere.

“It’s something we are very proud of, and we look forward to seeing our loyal customers taking on the challenge!”

A focus of the new facility will be families, with two seater karts and Sodi Kids Karts also available, which will shortly be joined by tikes training centre electric karts, allowing children as young as two to have their first driving experience.

All karts are fitted with state of the art safety systems and electronic kart control equipment, ensuring a fun and safe experience for all participants.

The former Go Karting Gold Coast venue served the company since 2009, and was the site of the successful 2015 Guiness World Record attempt, where a team of six Slideways staff members set a new benchmark for the longest distance travelled by a team at an indoor go kart facility in 24 hours.

The Brisbane facility is also a world record holder, dating to 2014 when Cameron Wilson set the longest distance travelled at an indoor go karting facility by an individual.