Dutchman does the double in SA

Dutchman does the double in SA 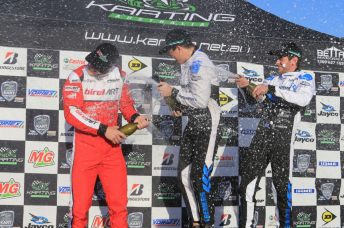 Marijn Kremers enjoying the spoils of victory on the podium with his Patrizicorse team-mates. Pic: Coopers Photography

Queensland-based Dutchman Marijn Kremers claimed a pair of victories at Round Three of the Australian Kart Championship presented by Jayco and Castrol EDGE in Monarto, South Australia on Sunday.

Kremers led home a Patirizcorse team trifecta in the KZ2 final with Bundaberg’s Troy Loeskow and Gold Coast’s Chris Hays joining the Ricciardo Kart pilot on the podium. It is he first time in the history of the Championship that three drivers from the same team have filled the podium in the class.

After moving into the lead on the opening lap Kremers was never headed in the main event before crossing the line almost two seconds clear of Loeskow.

Kremers set the pace for the majority of the weekend in the X30 class only to be led across the line by Leigh Nicolaou in the final. A post-race driving infringement penalty for Nicolaou handed the win to Kremers ahead of Zac Soutar and Adam Lindstrom with Nicolaou classified fourth.

“It has been an incredible weekend. I was struggling for speed in practice in the KZ2 class but we continually worked hard at improving my speed and came away with the win,” said Kremers.

“To have three Parizicorse drivers on the podium is just amazing. I’m so happy for everyone in the team.

“After trying so hard over the past two years to get a win in Australia, its a great feeling to finally break through for a win.” For much of the KZ2 final New Zealand driver Ryan Grant appeared to be fly in the ointment for the Ricciardo team having slotted into second place in between the trio. However, a misfire would end his run towards his second podium finish in 2016.

Canberra teenager Joshua Fife set the pace in the early part of the weekend but a mechanical issue and an engine failure at high speed while leading the final two heat races dropped him down the starting grid for the final. He would eventually finish 11th.

Gold Coast teenager Jack Doohan moved to the top of the Championship standings in the KA2 class with a faultless display in Monarto. After dominating the qualifying race action the Red Bull-backed driver was pressured by Damon Papasergio in the final before holding on for his second straight victory. Papasergio finished second ahead of Harrison Hoey.

Local driver Ben Delaney was one of the front runners in the KA3 Senior class across the weekend. After enjoying victory in the final heat race, he then showed his opposition a clean pair of heels in the final to cross the line first ahead of Cody Donald and Matthew McLean. 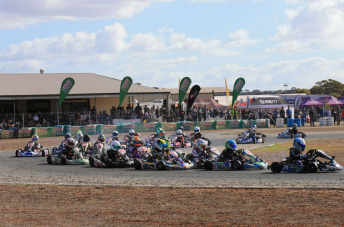 Following a strong showing at the previous round in Puckapunyal, Shamick Racing youngster Harry Arnett continued his improvement this weekend in Monarto to battle for the Cadet 9 victory. Arnett grabbed the lead from the outside front row at the start of the final before Alex Ninovic fought back to reclaimed the lead a handful of laps later.

The duo then raced nose to tail for several laps before Arnett fought back at half race distance and edged away for the victory.

Jay Hanson, Beau Harris and Joshua Smith enjoyed a three way battle in the KA4 Junior final before Hanson held on for the win.

Queenslander Brendan Nelson secured his third consecutive round win in the TaG 125 class aboard his FA Kart. After dominating the qualifying races Nelson opened a handy buffer over the Joshua Car in the early laps of the final. Car closed in late in the race to pressure Nelson but was unable to find a way past the Championship leader and had to settle for second place. 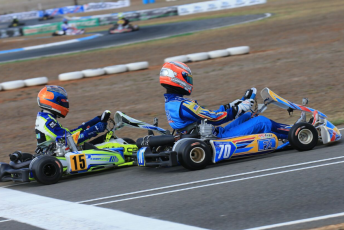 Shamick Racing’s Kai Allen was nothing short of dominant all across the weekend in the Cadet 12 class. Allen won every race across the weekend and crossed the line 4.7 seconds clear of Fletcher Harris in the final. Local driver Blake Purdie crossed the line third after an intense battle late in the race. Purdie did however receive a post-race penalty elevating his Zanardi Corse Australia team-mate Christian Cowie onto the podium.

The next round in the five-round Championship will be contested in Ipswich, Queensland on July 1-3.

DRIVERS CHAMPIONSHIP
After Round 3 of 5