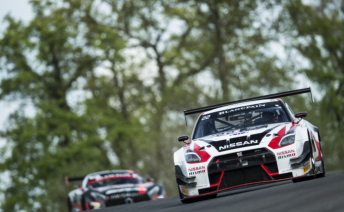 As during the opening event of the Sprint Cup season at Misano in Italy last month, the team-mates faced a tall order in the races after a difficult and frustrating run in timed qualifying where the lack of a clear lap resulted in a much lower than expected starting slot for the Qualification Race.

Even so, the pairing battled hard in Sunday’s two contests and managed to come away from the Main Race on Sunday afternoon with their first Silver Cup podium placing – just missing out on an outright top 20 finish from the 37 car field.

“It’s been another tough weekend but we had pretty good pace in the races, the second one was the better of the two and the car felt better in the Main Race”, said Chipping Norton-based Sean,

“It was a shame qualifying didn’t work out, we just couldn’t get a clear run, so from there it was always going to be a big ask to do much.

“Brands GP is a pretty tight track for so many cars, so to come through with third in the Silver Cup and 22nd overall wasn’t bad going.

“We definitely made some progress with the car so we’re looking forward now to the next round of the Endurance Cup at Silverstone next weekend.”

Brands Hatch basked in glorious weather all weekend, but the very warm temperatures also meant extremely hot conditions inside the cars for the drivers to contend with – for Sunday lunchtime’s Qualification Race the air temperature was 26 degrees.

Sean took the opening stint of the one-hour race and ran fifth in the Silver Cup and 36th overall for the opening 25 minutes of the contest before then starting to move up the order.

As the pit-stops began to be served, the No.22 Nissan GT-R NISMO GT3 remained on track deep into the driver change ‘window’ and Sean eventually pitted with 26 minutes left on the clock.

Handing the car over to Sánchez from 13th overall and the Silver Cup lead, the Mexican joined the race in 33rd position overall and fifth in class and managed to gain a couple of places before the finish to secure an improved 31st on the grid overall for the Main Race three hours later.

Sanchez took the first stint of the second contest and moved up into 29th overall initially before then rising into 24th place and fourth in the Silver Cup by lap seven, also closing on the class top three.

As pit-stops started to be taken 25 minutes into the race, Sanchez stayed out and moved into the Silver Cup lead and the outright top 10 before then pitting with just under half an hour left to go.

Running in 26th position, fourth in class, Sean had only been on track for a few minutes before the Safety Car was deployed as a result of a heavy excursion on the Grand Prix loop for the Audi of Michael Meadows.

Elevating Sean into 24th overall and third in the Silver Cup, the race was only able to be re-started with just under 10 minutes to go.

Although there was little time left in the one-hour contest, the NISMO Athlete made more progress and climbed into 22nd position overall and maintained his top three placing in class.

There is now a break of almost two months in the Blancpain Sprint Cup calendar with round three of the season taking place over the weekend July 2-3 at the Nurburgring in Germany.

Before then, Sean will continue his campaign in the sister Blancpain Endurance Cup – beginning with round two of the season at his ‘home’ track, Silverstone Grand Prix Circuit, next weekend, May 14-15.