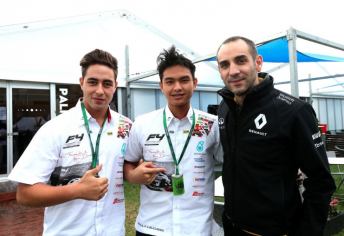 MEDIA RELEASE: Drivers in the new Formula 4 South East Asia championship (F4SEA) will be the only FIA F4 drivers linked to Formula 1 through the F4SEA’s unique use of the Renault Sport F4R race engine.

“Firstly, we thoroughly evaluate them to give the right steer through the vast motorsport landscape. Then, they are exposed to the pinnacle of technology through the F1 team and what is required to get there.

“In short, we aim to turn each Academy driver into an elite athlete, capable of performing to their absolute best.”

Malaysian Adam Khalid and New Zealander Maori Faine Kahia were recently given the opportunity to spend some time with Renault Sport’s F1 drivers.

Both were given an insight into what goes on behind the scenes in the pit garage during a Formula 1 weekend and the experience of listening to the Renault Formula 1 drivers communicating with their engineers.

Renault’s involvement in F4SEA gives drivers a lot of confidence, Adam Khalid explained:“It’s a real big thing not just for Asia but for the whole F4, the fact that we already have links to the Renault F1 team in the early stages.”

Faine Kahia agreed: “It’s really comforting to know that Renault is taking the F4SEA seriously. There’s not many pathways in the motorsport world which don’t just require a big pocket.

“It’s awesome for Renault to have that development opportunity and I hope I’ll be part of it.”

F4SEA, powered by the FIA-homologated Renault F4R engine, will kick off the 30-race programme on 6 August at Sepang and will support V8 Supercars, Asian LeMans, WTCC, Lamborghini Trofeo and Audi R8 with six events on four circuits in three countries.

Renault Sport Managing Director Cyril Abiteboul says: “F4 is a fantastic platform in Asia to find a young and emerging star in the area to bring to F1 one day.“

To that end, Groupe Renault recently confirmed at the Chinese F1 GP the addition of a Chinese driver to the Renault Sport Academy.

F4SEA Promoter Peter Thompson says: “Renault Sport has stated our drivers are part of their portfolio considered for the Renault Sport Academy.

“I believe our F4SEA drivers will impress everyone and a place at the Renault Sport Academy is their ultimate goal. This is a wonderful and unique opportunity for any driver.”