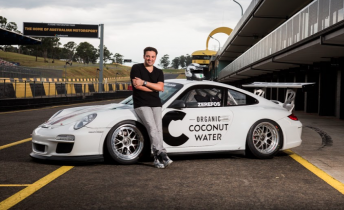 Zerefos will compete in the Porsche Sports Car category, racing the #23 GT3 Cup Car, a car which has been driven and signed by Australian F1 star and current Porsche World Endurance Championship factory driver Mark Webber.

“It was a nice call to receive from the car’s owner Indiran Padayachee,” Zerefos said.

“I quickly made sure I was in the country and available to race, because to race a car that Mark Webber has driven is a really exciting opportunity.

“I competed at Rennsport a few years ago and had success so hoping for some more this year in the Porshce Sports Car races.”

Zerefos finished second in class at this year’s Bathurst 12 Hour, and has been very busy since.

“It’s been a busy start to the year with business and racing commitments, I have been on the move since Christmas,” Zerefos said.

“I was at the F1 Grand Prix in Melbourne, then I returned to the US for the Long Beach Grand Prix and Formula E, and spent some time in New Zealand so it’s always nice coming back to Australia to race and catch up with fans and sponsors.”