Marquez arrives on top as Lorenzo prepares to dress in red

Marquez arrives on top as Lorenzo prepares to dress in red 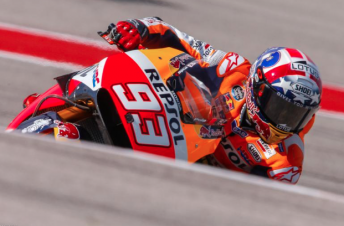 MEDIA RELEASE: Two wins in three races have Marc Marquez sitting pretty at the top of the MotoGP World Championship as Jorge Lorenzo announces his signing with Ducati for 2017 and 2018.

The Circuito de Jerez is a classic World Championship track, first holding a round in 1987 and hosting a number of titanic battles since.

Be it Doohan and Criville, Rossi and Gibernau, Lorenzo and Pedrosa or Marquez and Lorenzo, Jerez always produces great racing between the biggest names in the sport.

Races are won and lost in the final corner, Turn 13, named after Jorge Lorenzo and causing fans and riders alike to hold their breath as they tip in for the last time.

Almost every corner on the circuit has seen some kind of memorable moment, the track dripping with Grand Prix history.

After struggling to get to grips with the new rules in testing, Honda and Marc Marquez have turned it around and currently lead the championship.

The Spaniard is the only rider to finish on the podium in all three of the opening rounds, Marquez’s breakneck speed and consistency netting him 66 points as he returns home to Spain.

His rivals have a lot of catching up to do in the coming rounds as the closest of them, Jorge Lorenzo (Movistar Yamaha MotoGP) is 21 points behind.

Fortunately for his rivals, Marquez doesn’t enjoy the Jerez circuit as much as the Circuit of the Americas, the higher curbing not allowing him to take the lines he wants.

Despite finding the curbing restrictive, Marquez has never finished off the podium in Jerez in the premier class and has been inside the top two for the last five years at the circuit.

It will take a herculean effort to overthrow Marquez but as the first three rounds have shown, even the most experienced riders can make mistakes.

Jorge Lorenzo is one of the many riders trying to make up for a costly mistake, in his case the crash in Argentina.

A second place in Austin proved that the fall was just a small blip and otherwise the Movistar Yamaha man is a serious title contender yet again.

He was unable to challenge Marquez in Austin, but Lorenzo was under no delusion that Marquez would be almost unstoppable at the American track.

Riding in front of his home fans for the first time in 2016 as the MotoGP™ World Champion, Lorenzo heads to the Gran Premio Bed Bull de España with no such reservations, hungry for victory.

Since joining the premier class in 2008, Lorenzo has only twice missed the podium in Jerez and has taken victory of three occasions.

His 2015 win started a run of four straight victories, getting his championship challenge back on track after three races off the podium.

The Majorcan is in a similar situation in 2016 as he sits 21 points behind Marquez in the championship standings and as the only rider who could lead the championship after Jerez other than Marquez.

Just ahead of the weekend it was announced that Jorge Lorenzo and Ducati would join forces for the 2017 and 2018 seasons.

Rumours have filled the paddock since the first round of the year and on Monday they were final put to rest as Yamaha announced they would wave goodbye to the three-time champion at the end of the 2016 season.

He may be heading to pastures new in the coming season, but both Yamaha and Lorenzo remain focused on fighting for another title. Who Lorenzo’s Ducati teammate will be is still unknown.

Third in the championship is Valentino Rossi (Movistar Yamaha MotoGP) who failed to finish for the first time since Aragon 2014 as he crashed out on the third lap in America.

He was unhurt, but his championship challenge took a serious blow as he’s now 33 points back on Marquez.

The last two years have seen Rossi finish on the podium in Jerez, his premier class podium count at the circuit an impressive 11, including six victories.

Rossi continues to look for improvements to his Yamaha, testing the rear fuel tank once again during the Americas GP.

The part was originally used during testing, but changes to the Michelin tyres made it largely unnecessary for both Rossi and Lorenzo.

More time is needed to evaluate the fuel tank fully and discover whether it may offer any advantages in the current climate.

Alongside Marquez, Pol Espargaro (Monster Yamaha Tech 3) is one of just seven riders to score points in all three races so far in 2016. With two sevenths and a sixth place, Espargaro holds fourth position in the World Championship and leads the Independent Team riders battle with 28 points.

The Spaniard is still looking for his first MotoGP podium finish and could very well visit the box for the first time if his current form continues.

Meanwhile his teammate, Bradley Smith ventures to Jerez with the aim of returning to the top ten.

The Red Bull Grand Prix of The Americas was a disaster for Smith who was forced to completely re-do the setting of his M1 after a horrid start to the weekend.

Improvements were made and he was on track for more points in the race until he fell, remounting for 17th place.

The Americas GP may have ended due to a crash for Dani Pedrosa (Repsol Honda Team), but he returns to Spain with the respect of the paddock and fans alike.

After crashing at Turn 1 and taking Andrea Dovizioso (Ducati Team) down with him, Pedrosa leapt to his feet to check on the Italian.

He would then retire from the race and apologise to Dovizioso immediately once back in the pits, an incredible display of sportsmanship from Pedrosa.

After being taken out in two of the last three races, ‘Desmo Dovi’ has slipped to seventh in the championship and is in desperate need of some luck.

As Dovizioso missed out on a potential third podium finish, Andrea Iannone (Ducati Team) got his first as he finished third in Texas.

This was Iannone’s first finish in five races and puts him a distant 11th in the championship with 16 points.

Aside from Pol Espargaro, Hector Barbera (Avintia Racing) has also taken huge benefit from the rule change achieving three straight top ten finishes and has already scored 25 points, just eight less than he scored throughout the entirety of 2015.

Sixth in the championship also sees Barbera as the highest placed Ducati rider.

Having achieved their first double top five finish since returning to MotoGP, Team Suzuki Ecstar remained in Austin for an extra day to run a brief test.

Both Maverick Viñales and Aleix Espargaro made big steps forward in the test and are eager to get back on track to put what they learned into action.

The pair continues to edge ever closer to returning Suzuki to the podium for the first time since 2008, a top three finish is certainly just around the corner.

Danilo Petrucci (Octo Pramac Yakhnich) sits out once again for this event as he is still not fully recovered from the hand injury he sustained during the winter tests.