Stauffer set to return to the ASBK grid for Round 3

Stauffer set to return to the ASBK grid for Round 3 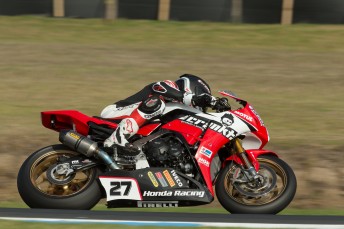 Stauffer was involved in a high speed spectacular crash at round one of the ASBK, which he walked away from, however a crash during testing for round two sidelined the Honda mounted star with a back injury.

However today, Stauffer has confirmed that he will return to the Superbike grid at Sydney Motorsport Park for Round 3 of the Yamaha Motor Finance Australian Superbike Championship presented by Motul Pirelli this weekend, and appears to be fighting fit for the remainder of the ASBK season.

Stauffer, who has been working hard in the background to return to fitness, says he couldn’t be happier to finally pull his leathers on this Saturday and Sunday at Sydney Motorsport Park.

“I am excited to get back on the bike – Sydney Motorsport Park is my home track and I am looking forward to getting back out there for Round 3,” he said.

“I have always raced motorbikes and it’s something I love, so to have to miss a round of the championship was not ideal. It was tough being sidelined, even though I wasn’t there I was still checking results.

“I am now heading into Round 3 with my competitors having one meeting up on me, but I have a great team supporting me and I am just going to try and go out there and race to the best of my ability.” Stauffer concluded.

Stauffer also shared what his expectations are for this weekend, after spending the last month off the bike.

“It’s really hard to know what to expect this weekend, I have never had an injury like this before, and with only getting medical clearance on Tuesday it has been hard to prepare my body to ensure I am fit for racing,” he said.

“In saying that, we have a great bike to work with, a great team, and we will all be working together this weekend. I’m just happy to be going racing again.”

With Stauffer returning to the grid, racing at Round 3 of the Yamaha Motor Finance Australian Superbike Championship at Sydney Motorsport Park, just got more exciting.