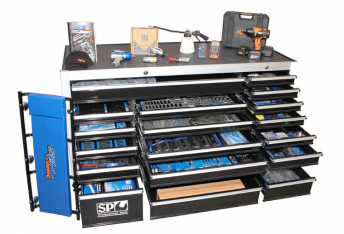 MEDIA RELEASE: SP Tools has been announced as the platform partner for Karting Australia’s Development programs throughout 2016.

The partnership will see the SP Tools brand proudly associated with the Get Started in Karting and Junior Sprockets programs.

‘Get Started in Karting’ will focus on the grass roots of karting and assisting newcomers of all ages into the sport.

After a successful pilot program in 2015, it was recently announced that an expanded schedule for the Junior Sprockets program will be held throughout the second half of 2016.

These days are designed to provide budding young karters with the thrill and excitement of kart racing in a safe and controlled environment while being educated by professional instructors and drivers.

SP Tools’ Managing Director Kevin Davis believes the potential for the sport of karting is enormous and is particularly excited about the potential of the new programs being developed.

“At SP Tools we’ve been involved in a variety of motorsports for a long time and when the opportunity came up to join with Karting Australia on some ‘grass roots’ programs we were immediately excited about the potential,” said Davis.

“I see enormous potential in the sport, particularly by helping those who are new to karting, and this is our way of being involved.

“After last year’s Junior Sprockets program we had a lot of good feedback from those who attended and look forward to the sport benefiting from the expansion of this program in 2016.”

Karting Australia Chairman Mick Doohan believes the involvement of SP Tools with the newly developed programs is a perfect fit.

“The involvement of SP Tools in Karting Australia’s Get Started in Karting platform is very encouraging and we’re delighted to be partnering with Kevin and his team,” said Doohan.

“Like everyone involved I’m very much looking forward to the new programs hitting the track later in the year to assist with further growth of the sport.”

The dates and venues for the SP Tools Junior Sprockets program, along with other aspects of ‘Get Started in Karting’ will be announced shortly.