McLaughlan looking for more in Perth

McLaughlan looking for more in Perth 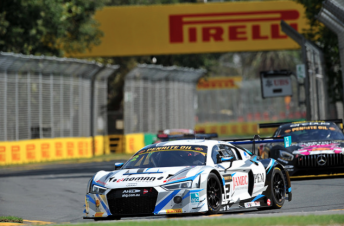 MEDIA RELEASE: Steve McLaughlan gave his brand-new Audi R8 LMS a winning debut at the second round of the CAMS Australian GT Championship, and is looking for more ahead of Round 3 at Barbagallo next month.

The JAMEC-PEM Audi driver enjoyed a strong weekend in Albert Park to claim round honours in the Gold Driver Cup, moving himself up to fourth in the competition for solo drivers aged over forty who are ranked PRO4 and below.

It was the first time McLaughlan had raced the new car, having taken to the streets of Adelaide for Round 1 in the older Audi R8 LMS Ultra.

“In Adelaide we probably chose the wrong car,” McLaughlan admitted. “It would have been faster in the new car but obviously I wanted to make sure I had the new car for the Grand Prix.”

McLaughlan still managed to secure 109 points in the Gold Driver Cup at the Clipsal 500 though improved on that performance at the Formula 1 Rolex Australian Grand Prix to score 162 points; 11 better than Greg Taylor who ended the weekend second.

Tony Walls (Objective Racing) also made ground on Gold Driver Cup leader Roger Lago (JBS Australia), with the McLaren driver building on his strong showing at the opening round of the season.

Lago however saw his advantage in the Gold Driver Cup slashed after being caught up in an incident in Race 2 which ended his weekend.

Ahead of the third round of the CAMS Australian GT Championship at Barbagallo, the categories first visit to the Western Australian circuit, McLaughlan is hoping to build on his performance last time out as he comes to grips with his new car.

“The car was reasonable, I wouldn’t say it was fantastic,” he said of his performance in Albert Park. “I was still coming to grips with it.

“When you change from one car to another it takes you a little while to get back on the pace.

“We’ve got a little bit of handling to sort out, just to get that bit more confidence in the car in high speed, but I think the car’s quite good.

“Overall though we’ve got to be happy.”

The third round of the CAMS Australian GT Championship will be held at Barbagallo as part of the V8 Supercars Perth SuperSprint on May 6 – 8, with two one-hour races scheduled across the weekend.