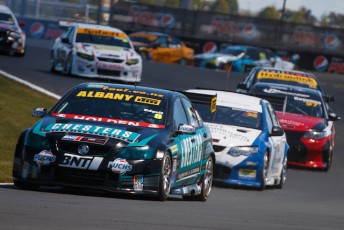 With the championship already decided, the battle is on for second between Tim Edgell and Mitchell Cunningham

MEDIA RELEASE: A bumper field is set to line up on the grid for the seventh and final round of the BNT NZ Touring Cars this weekend at Pukekohe April 16-17.

Spectators will be in for a thrilling weekend of racing with series organisers expecting a healthy field for the finale of the championship with up to 23 cars to line up across the two classes.

With Simon Evans already sealing the class one championship with a round to go, there is a close battle for second place.

Jason Bargwanna had looked to hold second place in the championship, but with the Toyota Camry driver unable to race due to other commitments, it looks like Tim Edgell and Mitchell Cunningham will battle it out for second place.

Edgell is currently 78 points behind Bargwanna in third, with Cunningham only 15 points further behind.

Knowing that second place is there for the taking, Edgell will be concentrating on running his own race, but qualifying well will be important at the fast Pukekohe circuit.

“We’re just focusing on ourselves and making sure we as a team do best we can do,” says Edgell.

“Pukekohe is one of the best tracks in New Zealand as it is very demanding on the drivers with its high speed turns and bumps etc.

Qualifying is always important as it sets the tone for your weekend.”

“Traffic is definitely something we need to be mindful of and it will be a big challenge in qualifying. But it’s the same for everyone and will make for exciting races no doubt.”

Cunningham also says qualifying will be crucially important, but won’t be counting points as the weekend unfolds.

“Being on the first two rows and having a decent start can set up your race perfectly, however if you have a well-balanced car taking it to your competitors you should find a way past if you have the speed.

“One issue with Pukekohe is you will find the guy you are racing against in strong in the places you are weak and so forth,” says Cunningham.

“I don’t want to race conservatively counting points, I want to go out and race hard and whatever happens, happens.”

“Pukekohe is a great circuit, it can be thoroughly enjoyable or horrible depending on the conditions and car handling, I have experienced all that Pukekohe has to offer.”

Taupo, allowing himself to get acclimatised to the new car.

“I managed to do around 50-laps, and was able to get myself comfortable and familiar with the car. There are a lot more adjustments you can make as far as sway bars, etc, so I was more so trying to learn how that would affect the car throughout a lap,” says Barry.

“I only had older tyres, but I managed to get within a second of Jason Bargwanna’s qualifying time here last year, where he was on new tyres. I was quite happy with that. The car was a real eye opener, a lot more horsepower and performance than I was expecting. I’ve had to adjust my driving style slightly.

Also joining the class one field will be Simon Richards of Hamilton in the ex-Nick Ross Holden Commodore. Also look for John Midgley in a Ford Falcon and Tony Anderson in a Holden Commodore.

In class two, Wellington’s Brock Cooley has sealed the championship with one round to go. Further back Brad Lathrope looks to hold onto second place in the championship, with Hamilton’s Simon Fleming behind in third.

The class two field will be bolstered by the entries of Jamie Gaskin, Steve Taylor and Robert Wallace all in Ford Falcons.

The final round of the championship is at Pukekohe this weekend, April 16-17. Other classes competing over the weekend include the SuperTrucks, V8 Utes, Ssangyong Racing Series, Porsche’s, BMW’s, Pre-65 and GT’s.