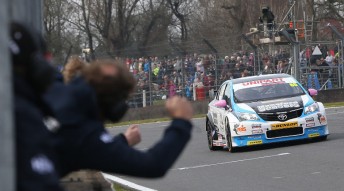 Entering its sixth season in the ITV4 live-televised, all-action BTCC – commonly regarded as the world’s premier and most fiercely-disputed tin-top series – Speedworks was keen to build upon an impressive end to the 2015 campaign that had seen Ingram clinch the plucky independent outfit’s breakthrough podium finish at Rockingham before adding to it with another in the Brands Hatch GP finale.

In a record-breaking 32-car field – featuring some of the very best touring car protagonists on the planet – the talented young Bucks ace lapped fastest of all in opening practice after his Speedworks crew had swiftly rectified a minor mechanical issue. Ingram topped the timesheets for the majority of the second session, too, producing a series of metronomically consistent laps in the #80 Toyota Avensis.

In qualifying, both driver and team lived up to their pre-season dark horse status and maintained their winter momentum. Emphatically delivering on his practice promise, the 22-year-old British Racing Drivers’ Club (BRDC) Rising Star posted the best lap ever recorded by a touring car around Brands Hatch’s short 1.2-mile Indy layout to annex his and Speedworks’ first BTCC pole position.

On a track still greasy and slippery in parts from overnight rain, Ingram made a textbook getaway when the starting lights went out in race one and maturely managed an early safety car period for an incident further down the order.

Thereafter, he found himself under constant pressure from Honda duo Gordon Shedden and Matt Neal – a pairing with no fewer than five BTCC titles between them – but didn’t put so much as a wheel out-of-place as he skillfully held his rivals at bay.

Indeed, the Hansford Sensors and RHA-supported KX Akademy graduate had already demonstrated at Rockingham last year – when he spiritedly took the fight to multiple champion Jason Plato – that he is far from intimidated by illustrious reputations, and over the closing stages of the race, he even edged away from his two pursuers.

As he flashed across the finish line more than two seconds clear, Ingram was met by a rapturous reception from the Speedworks pit wall and the capacity crowd, who erupted in applause for an outstanding lights-to-flag performance and tremendously popular triumph.

Beginning the second outing from pole once again, the three-time Ginetta Champion and former British Karting Champion remained in front until a forceful overtaking attempt by Rob Collard resulted in contact that consigned his damaged Toyota to an early bath.

Following a rapid repair job by his Speedworks mechanics, Ingram scythed his way through from the back row of the grid in the finale. Repeatedly setting lap times faster than the leaders as he artfully showcased both the Avensis’ raw pace and his overtaking prowess, he ultimately wound up barely half-a-second shy of sneaking into the points.

“I still don’t think the magnitude of what we have achieved has sunk in yet,” reflected Speedworks Team Principal Christian Dick. “This has been our strongest start to a BTCC campaign by a country mile. We knew the Avensis was quick from pre-season testing, but you can never be sure exactly where you’re going to shake out in the pecking-order because we’re up against some very high-calibre opposition – including manufacturer teams with far greater resources than us.

“I think the most encouraging aspect is that it isn’t just a continuation of our progress at the end of last year – we almost had to press the reset button over the winter with the new-specification RML components, and this validates the hard work put in by all the boys at the workshop. Each and every one of them has played a vital role.

“We expected to be somewhere in the ballpark at Brands Hatch and if I’m being honest, I was secretly hoping we might be able to slot in just behind the factory Hondas – but to surpass that and put the car on pole was simply exceptional.

“Tom was under pressure throughout race one, but he led flawlessly from the front like a seasoned pro and controlled it beautifully; he never gave Shedden a look-in, and he even had a little extra pace left in his pocket had he needed it. It was a superb drive.

“I’m immensely proud of the entire team; we’ve finally proved what I’ve been saying we are capable of for a long time, and this result means so much to us all. Everybody is hugely excited moving forwards, and the key will be to sustain this level of performance. We head to the next round with very little ballast and an extremely fast car, and we need to make sure we exploit that opportunity.”

“In light of the form in which we had finished 2015 and the improvements made over the winter, the bar had definitely been raised going into the new season,” echoed MSA Academy member Ingram, “but even allowing for that, if somebody had told us pre-weekend that we would be leading the championship after the first race, we would probably have thought it was an April Fool!

“I was able to control the pace quite comfortably in race one. I felt like I had the legs on Gordon and could hold a half-second margin without too much trouble, and when I needed to push to open up a gap, I could do so. That’s testament to the incredible work the Speedworks guys have done on the Avensis and underscores our conviction that despite being one of the earliest NGTC models, it still has plenty of untapped potential. It was good to show people that it remains a competitive proposition and that we have the engineering expertise to extract the most out of it.

“All the way around the last lap, I was listening for even the tiniest of vibrations, and when I saw the boys hanging over the pit wall as the chequered flag came out, I just screamed down the radio. Hearing the team’s reaction was such a special moment, because they have waited so long for this result and thoroughly deserve it for all the effort they put in both on and off the track.

“There’s no question that on paper, we shouldn’t be doing what we are doing. At the end of the day, Speedworks is only a small, family-run operation, but the awesome thing about the BTCC is that it gives teams like us the chance to shine and pull off some giant-killing exploits – and now David has beaten Goliath once, we want to do it again and again.”