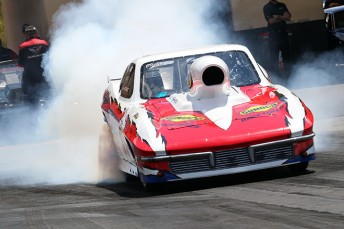 MEDIA RELEASE: A five way State of Origin battle for supremacy will ignite this weekend when the 2015/2016 ANDRA Championship Season comes to a close in the ANDRA Championship Grand Final at Adelaide International Raceway April 9-10.

In one of the most intriguing title fights this weekend, the Summit Racing Equipment Sportsman Series Top Sportsman honour will likely be decided in the final race with five drivers in contention.

A further 40 points behind in fifth is Jason Arbery  (Mt Gambier, SA) who can easily make up that difference by reaching the semi finals or better to sneak by his rivals for the win.

Stares and Russo each come into the weekend with two event wins this season while Arbery has one win to his name. McBain and Saliba are yet to break their duck this season and all five drivers will need a win to ensure they come out number one.

In just it’s second season as an ANDRA Championship bracket, Top Sportsman has fast become a favourite among spectators featuring some of the closest, most exciting racing in the Summit Racing Equipment Sportsman Series.

The banter between the racers is also first class but the four points leaders are all business when it comes to getting in the ring for a five-man fight worthy of WWE’s Wrestlemania.

“To win the championship, we just need to do what we have been doing all season and that is focusing on my team and car, not worry about what everyone else is doing and just keep turning win lights on,” said Stares.

“We didn’t go to Whyalla (in March) as we thought we needed to give the other boys a chance to get some points (laughs).

“But being serious we didn’t go to Whyalla as we had gone over the points cap at Portland and although I don’t agree with the points system its what we have to race by. There was not going to be any advantage in spending the money and time to go to the Whyalla race.”

It was Russo who took advantage at Whyalla with his second win of the season to climb into the traffic jam of racers on 300 points and a repeat at his home track could land him a maiden Championship.

“The time has come to decide the ANDRA Champions,” Russo said. “This bracket has become a glorious success attracting some great gentleman to the sport of drag racing.

“The friendships I have made in Top Sportsman are beyond reproach, racers like Jason Stares, Stuart McBain, Darren Saliba and myself all on 300 points with Jason Arbery hot on our heals, the Grand Final at AIR will be a great combat for the ANDRA Gold Christmas Tree.

“Never before have I experienced such mutual respect for my fellow racers, it’s an honour to be part of Top Sportsman but on the track we become gladiators and go for the win.

“With my brothers Rick and Mark and my parents blessing we do our best to be victorious and entertain the spectators, people will get their money’s worth with Top Fuel, Top Doorslammer and all the sportsman brackets putting on a great show. The 57 Chev is going to get down and boogie so we’ll see you there.

“I just want to say without the help of Bob Sherry I doubt we would be in this position as we hurt the engine at Calder Park (in January) and were doubtful of making Whyalla! But with the help at Sunset Engines, Bob and my brothers Rick and Mark we are now in contention for another chance at becoming no. 1 in Australia!”

Victorian McBain just missed out by 20 points on winning the first title in Top Sportsman history in 2015 when he wasn’t able to compete at the final event. He has been a runner up three times this season and is currently without a mark in the win column. But if he can go one better at the Grand Final it will get the monkey off his back and secure the Championship he agonisingly missed out n last year.

“We are very excited to be part of this battle for the Top Sportsman Championship title,” he said. “Last season it also went down to the wire and we just missed out.

“There are some tough racers in with a shot but we are confident we can put down some great runs at Adelaide as the track is generally very sticky and the weather will be awesome this time of year which will help us put down some fast consistent runs.

“Obviously our goal is to cut great lights and put ourselves in a position to control the races. We know the car is fast and consistent; it’s really going to come down to me as a driver to get the job done. I am looking forward to the challenge.”

The fourth member of the 300-point club this season, Darren Saliba, has top qualified at the past five rounds in his Pontiac GTO.

Saliba is the favourite to pace the field once again and if he can convert that success to an event win on home turf, he will steal the Championship.

“We’ve done the miles and put in the hard yards this season which has rewarded us with the opportunity to take out the Top Sportsman Championship in our own backyard…. bring it on!”

The 2015/2016 ANDRA Championship season will come to a close April 9-10 at Adelaide International Raceway featuring side by side Top Fuel passes between Darren Morgan and Wayne Newby plus Championship showdowns in both the professional ANDRA Drag Racing Series and Summit Racing Equipment Sportsman Series.