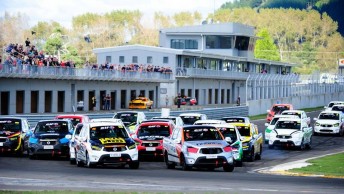 The first announcement was that a deal had recently been done with Nelson based Trans-Tasman Industries (TTI) to supply their NZ Designed and Built TTI GTO 4-Speed Sequential Gear Boxes for the SsangYong Actyon Racing Utes for the 16/17 Series.

The second was confirming that the SsangYong Racing Series would go beyond its original plan of racing for a three-year term, confirming that SsangYong NZ would push their involvement out to at least five years with the Series.

“With the ongoing success of the SsangYong Brand in New Zealand over the past five years, and the Actyon Race Series over the past two seasons, it wasn’t a difficult decision to commit to at least another two years on top of our original plan of three years,” said Cooper.

“Helping with that decision was the deal for Bruce Verdon and his team in Nelson to supply the SsangYong Racing series with their fantastic TTI Sequential Gearboxes from next season.

“We have been testing two of their 4-speed Sequential Gearboxes over the past three rounds with absolutely no issues, and that’s important for the future, ensuring ongoing reliability with our Actyon Race Utes.

“The extra performance they provide over the standard gearbox is a plus, but it’s reliability that was at the top of our wish list.

“This is a big commitment from SsangYong NZ, and it proves we want to be a significant part of Motorsport in New Zealand for many years to come. Plus, we’re a NZ owned company supporting another NZ owned company, and that’s important to us.”

“We will be supplying thirty of our TTI GTO 4-Speed Sequential Gear Boxes for their upcoming 2016/2017 Championship and beyond.”

An expat South African, Bruce began cutting gears more than 30 years ago before expanding his skills into pattern making, moulding and casting.

TT Industries was born in 1986 in South Africa, originally specialising in manufacturing packaging machines and components.

In 2000 he moved to New Zealand and the focus turned to producing classic motorcycle gear boxes. This change in direction occurred when he was approached with a request to build a 5-Speed gearbox for a replica 1950’s Matchless G45 Classic Motorcycle and the gearbox inspiration was sparked.

After building a prototype gearbox, it was taken to Phillip Island where it achieved pole position, two race wins and a lap record in the bike. The orders started rolling in and Bruce has never looked back.

In 2007 Bruce diversified the business again into the exciting world of design and production of sequential car racing gear boxes. You will now find TTI 6-speed Sequential gearboxes in all TLX spec NZV8 Touring Cars.

Next up for the SsangYong Racing Series is the final round of the Championship, at Pukekohe Park Raceway, South of Auckland (April 16/17 2016), where another full field of SsangYong Actyon Utes are expected to do battle.

The SsangYong Racing Series is Powered By The BNZ Bank, and supported by SsangYong NZ, LDV Commercial Vehicles, Elf Lubricants, and Traeger Barbeques.