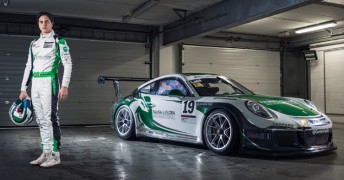 MEDIA RELEASE: Alessandro Latif is eager to take to the track for the beginning of the 2016 Porsche Carrera Cup GB (PCCGB) campaign, following a positive pre-season testing programme that culminated in the unveiling of his GT Marques-run, Fauna & Flora International-backed Porsche 911 GT3 racecar.

Latif has switched disciplines this year from single-seaters to sportscars, although having clinched the 2014 Blancpain Sprint Series Pro-Am Championship crown, twice triumphed in-class in the prestigious Gulf 12 Hours and previously contested the legendary Rolex 24 At Daytona, his credentials speak for themselves.

To-date, however, the rising young British star has predominantly ploughed his furrow outside of his home country, meaning he must get to grips with the majority of circuits on the fiercely-disputed, ITV4-televised PCCGB calendar, most of which runs in support to the phenomenally popular British Touring Car Championship (BTCC).

With that in mind, Latif and GT Marques formulated a comprehensive pre-season testing plan to assist the London-born teenager in acclimatising not only to his new 460bhp ‘office’, but also to some of the venues the UK’s fastest one-make series will visit over the coming months, including Brands Hatch, Croft, Oulton Park and Snetterton.

He has benefitted, moreover, from the experience and advice of recently-signed team-mate Dino Zamparelli, a former GP3 Series front-runner and PCCGB race-winner.

As he proudly took the wraps off his Fauna & Flora International-liveried Porsche 911 GT3 at the official championship Media Day at Silverstone, Latif made it clear that his sights are firmly set on conserving his current momentum when the lights go out at Brands Hatch Indy on 2/3 April.

“Testing has gone well,” affirmed the 19-year-old Marlborough College graduate, underscoring his assertion by featuring up towards the sharp end on the timing screens throughout.

“We’ve had some very productive days in a variety of conditions, and whilst you’d always like more dry weather running, the wet track time could prove valuable once the season gets underway!

“I’m becoming more and more acquainted with the 911 GT3 each time I climb into the cockpit, with the result that it feels more like home with every session.

“The main aspect I still need to master is getting the most from new tyres, but that will come, whilst the key area for performance gain is actually to be found in the braking, where extracting that final margin is all about technique – this isn’t a car you can hustle a lap time out of, but rather one that rewards precision, focus and finesse.

“We’re progressing in the right direction overall and I feel like I’m in a good place – I’m hopeful we can be competitive straightaway.

“The team has been great; everybody at GT Marques is ultra-professional, and we’re working together well.

“The team principal, Paul Mace is a racer through-and-through and ultimately, like me, he races to win.

“Having Dino alongside me has also been a massive help. He’s a very quick and experienced driver and he knows the British circuits like the back of his hand, so he will be an excellent benchmark during my first year in the series.

“I can learn a lot from him, and by sharing data, we can push each other and therefore the whole team forward. I think we’ll form a strong line-up.

“We’re all hugely pumped and excited for the forthcoming campaign, and I’m loving the livery on my car – the design is really sharp and I think the Fauna & Flora International colours will look great out on the track.

“I’m not setting myself any expectations as such – we’ll find out where we sit in the pecking order at the first round – but I’m quietly confident.

“The goalposts will be established at Brands Hatch, and then shifted accordingly as we target consistent progress across the season. As long as we achieve that, I think we can be happy with our performance.”