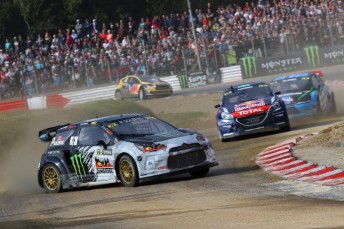 In the headline World Championship, a total of 17 Supercars each boasting more than 600bhp will go head-to-head across 12 World Championship rounds and includes a star-studded line-up of drivers such as nine-time WRC Champion Sebastien Loeb and America’s Ken Block plus reigning World RX Champion Petter Solberg and last year’s runner up, Timmy Hansen.

In the European Championship – which is made up of five events (Belgium, Norway, Sweden, Latvia and Germany) – there will be a record-breaking 23 full-time entries.

The front-wheel drive Super1600 category has 18 full-time entries, while the rear-wheel drive TouringCar field features a total of 15 cars. Round-by-round entries will further boost the entry level in World and European Championships.

Paul Bellamy, World RX Managing Director at IMG, concluded: “It is extremely encouraging to see such a strong field of drivers across each of our Championships in 2016.

“With over 20 different nationalities represented in World RX, Euro RX, Super1600 and TouringCar this demonstrates not only the growth of rallycross but also the diversity within our sport.

“Rallycross is well-known for attracting a variety of drivers from different automotive backgrounds and we are honoured to have so many world-class athletes choosing to compete in World RX on a full-time basis.”

Round one of the 2016 World RX season will kick off in Montalegre, Portugal, in just over three weeks’ time (15-17 April).