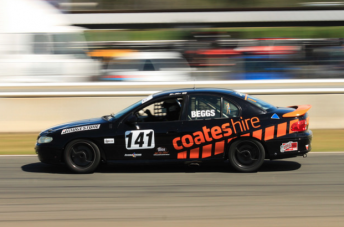 MEDIA RELEASE: Former series champion, Gary Beggs, began his tilt for the 2016 Queensland Saloon Car Series in the best way possible with a pole position and clean-sweeping the four races in an action-packed weekend at Lakeside Park on March 19.

A number of saloon car drivers from years gone by featured in the eight-car field including father and son duo Tony and Matt Shanks returning to the grid in their AU Falcons supported by Autorite.

2014 champion Beggs set the pace early in his VT Commodore to claim pole position ahead of reigning champion Coleby Cowham in the Escape Energy AU Falcon with young gun Matt Shanks in third.

Beggs converted his pole to victory in the first race of the year, after a commanding display saw him overcome a fast-finishing Cowham, with Matt Shanks completing the podium.

Beggs lead from the green flag in race two before a tank-slapper exiting Hungry Corner saw the Coates Hire VT Commodore spin back in front of Cowham’s falcon with no time to react. Cowham’s race ended in the grass at the Eastern loop, with officials effectively restarting the race. Beggs rejoined to take another victory, taking the chequered flag ahead of Matt and Tony Shanks.

The Coates Hire VT Commodore completed a hat-trick of wins with a commanding display in race three, avoiding a lap one collision between New South Welshman Sam Lee and Tony Shanks at the bus stop, with Leon Fletcher caught-out after attempting to avoid the incident on the grass. Matt Shanks and Shayne Hine in the Spraytech AU Falcon avoided the drama to finish on the podium.

Beggs came home with a victory in the final race of the weekend to clean-sweep all four races at the Lakeside Tribute. Cowham picked up two positions in the final race after Matt Shanks beached his Falcon at the Carrousel to take second place ahead of Shayne Hine, Tony Shanks, Leon Fletcher and Luke Andersen.

Despite his flawless record on paper, Beggs had mixed feelings about his outing on the weekend.

“I’m still annoyed at myself for causing the race two restart. Lakeside is a very fast, challenging circuit that needs respect. I pushed hard all weekend trying to get under the 60 second lap but still haven’t got the line sorted.

“It was nice to start the year with a couple of wins, so hopefully we can keep that up,” said Beggs.

The Queensland Saloon Car series will return to Morgan Park for round two, and the start of the CAMS State Championship, on May 28 and 29.