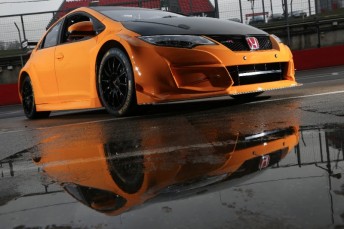 MEDIA RELEASE: Honda will defend its Dunlop MSA British Touring Car Championship drivers’ and manufacturers’ crowns in 2016 with the support of Halfords and Yuasa Battery Sales (UK) as co-title sponsors.

The three cars will be equipped with the potent new K20C turbocharged engine, based on the unit in the road-going Civic Type R and built and tuned by Neil Brown Competition Engines.

They will sport an interim orange-and-black livery until the eagerly-awaited 2016 colours are unveiled at BTCC Season Launch at Donington Park on 22 March.

Halfords sponsored a Honda Integra Type R from 2004 until 2008 – yielding a brace of drivers’ and teams’ titles – whilst Yuasa has been a vital element of the squad’s BTCC challenge since 2010.

Now, they come together as co-title sponsors of the team, which last year sped to its fifth constructors’ trophy from the past six seasons in Britain’s premier motor racing championship.

“We are pleased to welcome Halfords back to the fold alongside Yuasa,” said Honda UK Managing Director Philip Crossman.

“Honda has achieved great success in the BTCC and with the support of these two leading brands, we are confident that by all coming together for the first time this year, we will continue to be a force to be reckoned with.”

“We are delighted to be rekindling our partnerships with Team Dynamics and Honda in the BTCC,” echoed Paul Tomlinson, Motoring Expert at Halfords.

“The Team Halfords era is a key part of the sport’s history, winning back-to-back drivers’ and teams’ championships in 2005 and 2006, and we’re very much looking forward to renewed success over the coming seasons.

“The BTCC is one of the most exciting racing series in the world and we’re thrilled to be part of it again.”

“We’ve had an amazing journey so far in the British Touring Car Championship with Matt, Gordon and the Honda Yuasa Racing team, and now we look forward to working with Halfords to defend our championship with the team in 2016,” added Andrew Taylor, Managing Director of Yuasa Battery Sales (UK).

“Our sponsorship of the team now enters a new era – one that we’re very excited about.”

Halfords Yuasa Racing has been lapping up the testing miles in recent weeks both at home and abroad, including a week-long trip to Parcmotor Castellolí in Spain.

That has enabled the team to get a grip on the new RML control parts for this season, and with less than three weeks remaining until the lights go out at Brands Hatch for the first time, all three drivers are in quietly confident mood.

James Rodgers, Team Manager at Team Dynamics, added: “With the announcement of our sponsors and the launch of the car today, the only thing left to do before the start of the season is to reveal our new team livery.

“This is going to look very different from previous years and will make us stand out on the grid even more than usual. We are looking forward to media day and Brands for the start of the season.”