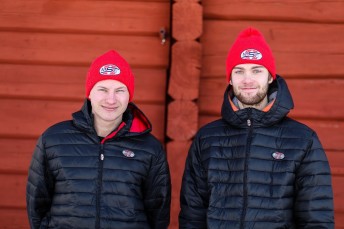 The drivers will pilot a pair of Olsbergs MSE-built Fiesta RX Supercars for the Swedish-based squad.

As well as competing in the World Championship, Eriksson and Gronholm – who are both just 19-years-old – will gain extra seat-time in their respective national rallycross series (RallyX Sweden and Rallicross Finland).

Olsbergs MSE has also announced that it will support Kenya’s Tejas Hirani and France’s Cyril Raymond in all seven rounds of this year’s RX Lites Cup.

“We are all clear that we want to create the next generation of champions, which have been born, raised and developed in the sport.

“Both Kevin and Niclas already have a few titles in rallycross despite both only being 19.

“Tejas and Cyril have also been extremely successful in their RX Lites career so far, so it will be a pleasure to work with this young and hungry group of people.”

Eriksson added: “Our main focus in 2016 is not for a title but we will do our best to make sure we have the right material and preparations to do well and we have a long-term plan.

“We will work together to grow this team in the coming years.

“As for Olsbergs MSE as a company, the future looks encouraging and after some extremely positive times from 2009 to 2015 we are now ready for a new chapter in the company´s history book.”

Marcus Gronholm commented: “We will focus this year on building the next generation of champions and ensure our drivers get the seat time and experience that they need.

“The 12 World Championship events as well as a handful of national races will be important for Kevin and Niclas’ growth.

“Both Kevin and Niclas have raced in different series with great success but now it’s the real thing, the final stage of the level required to be the best.

“With my old WRC team-mates Sebastian Loeb and Petter Solberg now fighting in rallycross, I must admit that there are times when I’m tempted to get back behind the wheel!

“But the future of the sport depends on what we create today, it’s time for new champions to be born.”

World RX Managing Director for IMG, Paul Bellamy, concluded: “Our line-up of drivers for the 2016 FIA World Rallycross Championship is extremely diverse and it will be interesting to see how Olsbergs MSE’s young gun drivers fare against some of our more experienced competitors.

“Both Niclas and Kevin will have excellent guidance from both Andreas and Marcus and I look forward to watching their progress over the upcoming season.”