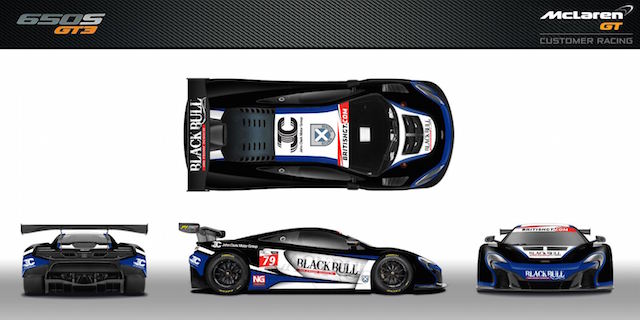 Underlining the intentions of the team from the outset, Black Bull Ecurie Ecosse has confirmed Factory Driver Rob Bell (UK) alongside Alasdair McCaig (UK) for the 2016 British GT Championship in the McLaren 650S GT3.

The Scotland-based Ecurie Ecosse racing team has extended its partnership with Black Bull, this time as title sponsor.

Ecurie Ecosse has become one of the iconic names in global motorsport, with a heritage of racing and winning for more than 60 years.

The patriotic blue and white racers have claimed victories in some of the world’s most iconic races, with some of the most famous names in the sport and taking the British GT title in 2014.

Bell joins the team to compete in a full domestic championship for the first time since 2002, and has enjoyed success across Britain in international series with five victories in the past decade.

His extensive knowledge of the circuits is further strengthened by the significant development and competitive racing in the 650S GT3, in which the 36 year old has claimed the Asian Le Mans Series title, double victory in the Blancpain Endurance Series and a podium at the Gulf 12 Hour race.

This combination puts him in a strong position ahead of the first round of the championship at Brands Hatch over the weekend 16-17 April. McCaig rejoins the Black Bull Ecurie Ecosse British GT line-up having competed for the past four years in various European GT series.

It is great to have the chance to race back on home soil. Since joining McLaren GT as a Factory Driver in 2011 I have had the opportunity to race at some of the world’s most iconic circuits – Monza, the Nürburgring, Sepang and Spa to name a few – but it is always special to race back on my old stomping grounds with the support of the British fans, who are the best in the world.

The British GT championship has been growing in stature over the past few years, and this season looks set to be one of the toughest championships for me, the team and the 650S GT3, but I am confident in all parties being more up for the challenge.

I am looking forward to working with Alasdair throughout the season, and it will be very special to have the opportunity to race with the iconic Ecurie Ecosse team – a team which has an unrivalled heritage in sportscar racing.’

‘The level of competition in British GT has always been high but is rapidly becoming one of the world’s toughest GT3 championships, and it will be great to see a McLaren wearing the famous Ecurie Ecosse colours for the first time.

The team are in a great position going in to the championship assault, and Rob [Bell] brings significant experience which will help them hit the ground running from the first round.

He will be a great partner for Alasdair in terms of his significant experience of the 650S GT3 and also his knowledge of the British circuits.’