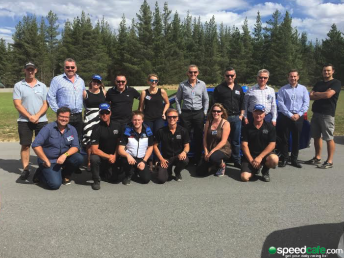 Highlands Motorsport Park opened in 2013 and has since hosted motor sport events such as the Highlands 101, the Australian GT Championship and Highlands Festival of Speed.

However, Highlands Motorsport Park is much more than an international-standard motor racing circuit – it’s a scenic and entertaining destination for everyone.

The partnership of The Subaru WRX Experience at Highlands is a first for Highlands and Subaru.

This brand new product entering the tourism scene for 2016 will be targeting the group market of conference and incentive customers.

“It’s a world first for both of us and we can’t wait to show the experience off. It’s already proving popular with bookings being locked in before we have even officially launched the experience,” says Ms Spillane.

“Highlands has become a much sought after destination for domestic and international companies looking to reward staff, host prospective clients, or celebrate a company milestone.

“Our out of the box approach to tourism has meant that companies can be assured that their participants have not had an experience like Highlands before.”

Ms Spillane adds: “The combination of Subaru’s commitment to excellence and their customer first approach, combined with the destination that is Highlands and our passion for tourism, makes this All Wheel Drive experience destined to be on the must do list in 2016!”

For Subaru of New Zealand, it was a perfect fit to provide a stable of potent, powerful WRXs to tackle the challenging and spectacular Highlands track. Subaru’s iconic, performance models, the WRX and WRX STi come equipped with a 2.0 litre and 2.5 litre turbo boxer engine and the superior handling of Symmetrical All Wheel Drive.

Subaru were part of the WRC for 19 years, and more recently has won the 2015 NZ Rally Championship.

While winning championships, unique technologies were also being fine-tuned. Subaru has used that performance know-how to help create the Subaru WRX.

Subaru of New Zealand Managing Director Wallis Dumper is thrilled to be the first manufacturer to supply a fleet of cars to Highlands Motorsport Park.

“The Subaru WRX at Highlands Experience was an idea that came up when we were visiting Highlands last year, with a view to utilising it as a venue for a Subaru event. It has been an exciting six months seeing it come to such successful fruition,” he says.

“The new generation Subaru WRX and STi are a first class fun ride and will have you on the edge of your saddle – much like the incredible 4.1km Highlands track that Tony Quinn has built.

“For Subaru, Highlands also represents an ideal destination for conferences and events and we look forward to not only bringing our own staff, dealers and prospective buyers to this scenic part of New Zealand but allowing others to enjoy our exhilarating Subaru WRX at Highlands Motorsport Park.”

“Automotive distributors and dealers from around the world were literally stunned to hear New Zealand could enjoy such a premium experience.

“So now this has become a reality we are encouraging Subaru customers on a global scale to come and visit this unique venue,” said Mr Dumper.