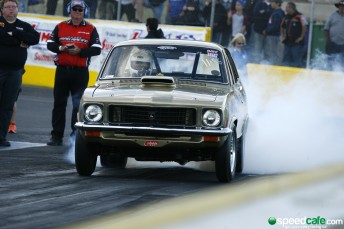 Having raced her way back into form at the Nationals, Tanner is focussing her attention on the “one round at a time” mentality with the Australian Super Street Championship within grasp at the Grand Final next month at Adelaide International Raceway.

“We just focus on round by round,” said Tanner.  “A long time Group Three racer, Geoff McNiff, from Sydney, told Gary and myself that Group Three racing is just ‘L&A Racing’ –Lucky you don’t break out, arsey you don’t red light.

“You can never drive through the entry gates of a complex expecting you are going to get to the final, let alone win the meeting.”

Reaching the final of the recent Australian Nationals just a few weeks ago is a huge achievement and although Tanner lost that final, disappointment didn’t even cross her mind.

“No way were we disappointed with the runner up trophy at the Nationals. We have been to three Super Street Nationals finals, won one and two runner-ups, so any time you get to a final is awesome.  I have been a bit hard on myself with my driving so the Nationals gave me some confidence back on going rounds.”

Heading into Whyalla, Tanner is returning to a track she knows very well and over the eighth-mile, Tanner has shown some remarkable consistency over the years.

“Whyalla is where I learnt to race, so Gary (Tanner) and myself always feel relaxed racing there.  The club run facility is always so accommodating and has got such a great vibe.

“The ANDRA Summit Racing Equipment Sportsman Series round will be fantastic, the Steel City Drag Club have worked so hard on improving the complex.  This will be one of the biggest meetings the track has ever held so we are really looking forward to it.”

Tanner is part of a strong South Australian contingent in Super Street, a bracket that always seems to feature a Croweater in the Championship chase.

Fellow South Aussie Harry Harris is also on the points cap heading into Whyalla and the Grand Final and has already faced off against Tanner twice in final rounds this season, winning on both occasions.

“What attracted me to Super Street was foot brake racing with no electronics! In SA we also have a lot more venues to race at  – Whyalla, Mildura, Portland, Coonawarra, Alice Springs, Calder and AIR.

“For the 10 years AIR was closed, Harry White and the SADC created the ‘Tri Series’ to keep racers, officials and tracks active in the sport, so the SA racers have always been competitive, and as they say, practice makes perfect.

The Summit Racing Equipment Sportsman Series presented by Whyalla City Council rolls into town March 12-13. The event will be the penultimate round of the 2015/2016 Season before the Grand Final at Adelaide International Raceway April 9-10.