Hungry Jack’s increases its appetite for V8 Supercars with Erebus

Hungry Jack’s increases its appetite for V8 Supercars with Erebus 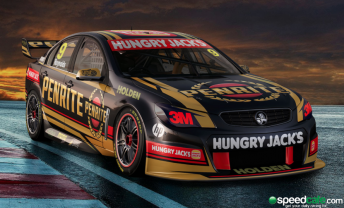 MEDIA RELEASE: Hungry Jack’s, has joined Erebus Motorsport for the start of the 2016 V8 Supercars Championship.

With over 400 restaurants, Hungry Jack’s has been a favourite Australian family destination since its inception in 1971.

“It’s great to be able to work with such an iconic Australian brand” said Klimenko.

“I’m a regular visitor and it’s great to see how much of a family environment there is in store.”

This partnership will see Erebus Motorsport roll out various promotions during the V8 Supercars season.

Current third-placed driver, David Reynolds, is excited by some of the activations the partnership will bring to fruition this year.

“I’m looking forward to visiting Hungry Jack’s stores at various rounds and dropping off some exclusive memorabilia for customers to win,” said Reynolds.

“It’s always cool to be able to chat to the fans and give away prizes away from the track.”

The teams test at Winton came with promising results.

The Clipsal 500 runs over four days, beginning on Thursday March 3, at the Adelaide Street Circuit.