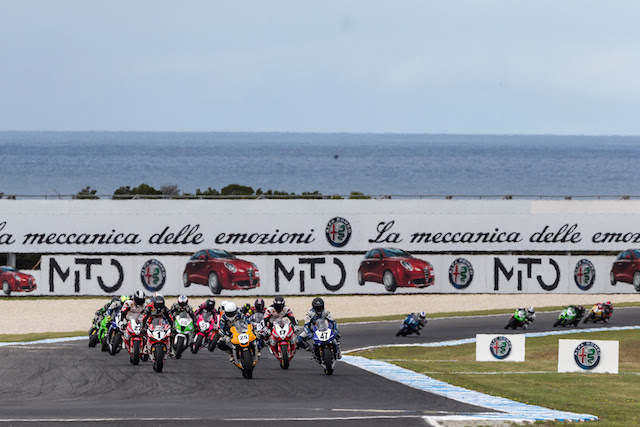 MEDIA RELEASE: The first round of the 2016 FIM Superbike World Championship, brought to fans by Yamaha Financial Services, and Round 1 of the 2016 Yamaha Motor Finance Australian Superbike Championship presented by Motul Pirelli held at Phillip Island over the weekend, has been hailed as one of the most successful road racing events in years.

With more than 61,000 spectators streaming through the gates at the Phillip Island Grand Prix Circuit throughout the course of the weekend, fans were treated to warm weather conditions, and plenty of action on the race track.

Motorcycling Australia’s Chief Executive Officer David Cottee was on the ground with the spectators at Phillip Island for the entire weekend, and spoke today of the collective success of the world class event.

“The WSBK round at Phillip Island was nothing short of spectacular – if you were a fan you were treated to outstanding performances from both the international and Australian competitors, and if you were a team, rider or a member of the event staff you were well taken care of by the Phillip Island Circuit crew,” he said.

“We had hundreds of dedicated volunteers acting as MA officials for the weekend, who gave their time to ensure the event ran smoothly and without them the event simply wouldn’t have been possible.

“The feedback Motorcycling Australia received as an organisation over the course of the weekend was fantastic.

“There was a 7% increase from last year in spectators at the event, and it was great to see so many motorcycling fans eager to be a part of the action.

“The fact that one of our World Supersport Wildcards finished on the podium, was a huge bonus, and it was evident that the crowd was well and truly behind all of our Australian competitors.

“As an organisation we are very proud of what was achieved by all involved on the weekend.”

Today Cottee also made comment on the outstanding performances at Round 1 of the Australian Superbike Championship at Phillip Island.

“The racing from the Australian Superbike Championship was a huge highlight for not only Motorcycling Australia, but the entire Australian road racing community on the weekend,” he said.

“So much hard work has gone on behind the scenes to get the ASBK Championship to where it is now, and it was fantastic to be able to reward the riders, their families, fans, and ASBK partners with a product that measured up to the WSBK.

“It is fantastic that both Yamaha Financial Services and Motul who supported the WSBK on the weekend, have also committed to our ASBK Championship for the rest of the year. We are very proud to be aligning the series with leading world brands.

“The future is looking bright for our sport, and with the depth of talent in the ASBK this year, the Championship is just going to go from strength to strength.

“As a whole the weekend exceeded all of our expectations, so now we’re looking forward to carrying that into the remaining five rounds of ASBK Championship, and of course in to next year’s WSBK round at Phillip Island.”

Motorcycling Australia would like to congratulate all who made the 2016 WSBK Round at Phillip Island a great success.

For all of the news and results from the weekend, head to www.ma.org.au or www.asbk.com.au