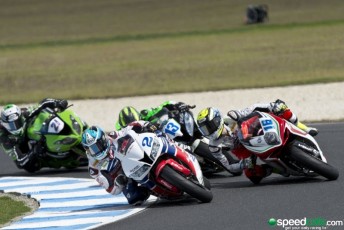 MEDIA RELEASE: The Honda WorldSSP Team has completed the first round of the 2016 FIM Supersport World Championship with an encouraging race result, as Patrick ‘PJ’ Jacobsen rode his Honda CBR600RR to a fifth place finish in what was a thrilling 18-lap encounter at Phillip Island in Australia.

The young American rider had a perfect launch from second place and took the lead at turn one. Jacobsen tried his best to pull away but the fierce on track competition resulted in a great battle at the front, which saw up to nine riders exchanging positions while dicing for the lead.

With the two front-runners able to pull away in the latter stages, Jacobsen fought hard for a podium place but due to a lack of grip, he was not able to ride to get the best out of the Honda CBR600RR in the final two laps. He crossed the line in fifth place, only half a second away from second position.

“We got a good start. I felt good in the beginning and had a great battle with Cluzel,” said Jacobsen.

“I thought it would have come down to a fight between the two of us but then we realised there was a whole group of riders behind us. Things got a little bit messy out there with people bumping to each other and it got kind of scary on the front straightaway.

“Towards the end I thought I would have had a bit more grip and obviously I was a bit disappointed with the result. I couldn’t deliver a podium today but I’m looking forward to going to Thailand, where I’m sure we can improve and do a better race.”

The next round of the 2016 FIM Supersport World Championship will take place at the Chang International Circuit in Thailand in a fortnight’s time.