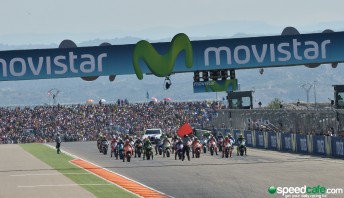 The Grand Prix of Aragon

MEDIA RELEASE: The Grand Prix Commission has decided to once again appoint the Gran Premio Movistar de Aragón as the best MotoGP round of 2015.

This is the third time that MotorLand will receive this recognition after first gaining it in 2010, its debut in the World Championship and again in 2013.

The Grand Prix Commission (GPC), which is formed from the FIM, IRTA, who represent teams from every category, Dorna and the MSMA, has decided to grant the Aragon circuit the honour of best event of the last season. This is the third time in six years that the Grand Prix of Aragon has received this important and prestigious award. In 2010 Aragon became the first circuit to receive the award during their ‘rookie’ season in the World Championship.

Held on the 25th to 27th of September last year, the Gran Premio Movistar de Aragón was marked with an excellent atmosphere in the stands and a level of organization that took care of every detail. The victories of Jorge Lorenzo in MotoGP, Tito Rabat in Moto2 and Miguel Oliveira in Moto3 put the finishing touch on a vibrant weekend in which 114,131 fans attended the three-day event.

The president of MotorLand, Marta Gaston, expressed her satisfaction and gratitude for the award: “This is recognition for all the great work and good organization carried out by MotorLand during the Gran Premio Movistar de Aragón. It’s a stimulus that compels us to continue improving every day, working hard to improve the international appeal of MotorLand, Alcañiz, Teruel and Aragón.” Gaston also expressed her gratitude to IRTA, the FIM and Dorna “for their assistance each year at the Grand Prix, as well as the security personnel involved in the work and the thousands of fans who came to share and enjoy the passion for two wheels.”

The CEO of Dorna Sports, Carmelo Ezpeleta, felt this award was the result of hard work well done by the team at the Aragón track since its inauguration: “Receiving the award for the best circuit of the season means the young team of MotorLand work well, with precision and professionalism. With a historic route from the urban circuit of Alcañiz, the new track now enters the MotoGP calendar as one of the most modern facilities in the world. This is evidenced by the massive pilgrimage of fans each year and the excellent words the riders speak about the track, a circuit that is varied and with many fun areas. Surely this tireless work from the staff and their level of excellence has allowed the track to become a regular fixture when designing the Grand Prix calendar each year.”