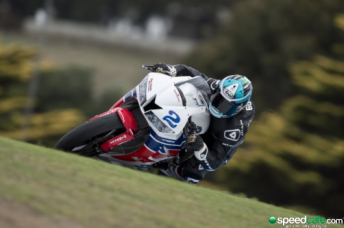 MEDIA RELEASE: PJ Jacobsen and the Honda WorldSSP Team have concluded their two-day official test at Phillip Island, the last winter preparation they will have before the opening round of the season, which will start in three days time at the same venue.

The 22-year-old American was reunited with the same Honda CBR600RR he rode to the runner-up spot in the series last year, with the goal to find the best set up for the weekend ahead.

Despite the inconsistent weather encountered on the first day and a small crash this morning at Turn 2, Jacobsen was able to complete 119 laps of the Australian circuit – more than any other World Supersport rider on track – while trying different settings at the front and the rear of the bike, as well as evaluating new rear Ohlins suspension units.

He eventually finished with the fourth fastest time (1’34.415), which was set during the second of the four sessions – in much cooler conditions compared to today’s extreme heat.

The team will now analyse the data gathered over the next two days to fine-tune the package and get ready for the first free practice session of the 2016 FIM Supersport World Championship, scheduled for Friday at 11:30 local time (00:30 GMT).

“It was a really positive test at the end. Yesterday went particularly well and we were able to go through a lot of stuff, including new Ohlins suspensions,” said Jacobsen.

“The team and I have just been working hard and I think we have finally found an encouraging point and we’re looking forward to going into the weekend with a strong setup now.

“It was a shame I crashed; we were just playing with the new settings and trying to figure out the new rear end. I just got on the gas too early and the bike spun around.

“But I am sure we have it figured out and it now feels good, so I’ll make sure that it’s not going to happen to me again.”