Black attacks and Kendall bounces back

Black attacks and Kendall bounces back 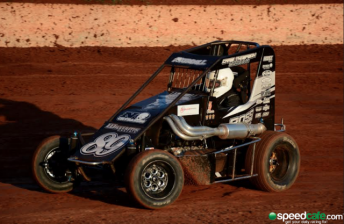 MEDIA RELEASE: It is often said that sometimes it is better to be lucky than good, well on Saturday night (February 20), Sean Black was lucky and good – very good in fact – in his drive to victory in round eight of the Super Sedan Series at Archerfield Speedway.

Heading into the event as the series leader and having scored his breakthrough feature race win in Sydney earlier this season, Black pounced in the closing stages of the race to finish ahead of Jason Campbell and Ian Brims.

Australian champion Matt Pascoe looked to have the race very safely in his keeping with only 15 of the 40 laps to run, having established a sizeable lead after a sensational surge through the field from position 10.

However, a couple of late-race restarts negated his advantage and enabled Darren Kane, who moved ahead of Black on lap 28, to lobby for the lead.

When contact between the lead pair 10 laps later resulted in a flat tyre for Kane and Pascoe’s banishment to the back, Black assumed control and saw off the late-race rush from Campbell to emerge a worthy winner.

Wayne Brims finished fourth ahead of Dempsie Pails, who started alongside Black on the front row of the grid and settled into a steady pace after being shuffled back in the opening laps.

Sam Roza was next best in advance of Justin Randall and David Musch, with Pascoe climbing back to ninth in the final three laps. Craig Craft completed the top ten, followed by David O’Keefe, Darren Anning, Nicholas O’Keefe and Jack Childs.

The biggest field seen at Archerfield for quite some time resulted in some great racing on a multi-groove track that drew universal praise from competitors. Black started the night as he ended it, taking the first heat over Ian Brims and Lachlan Onley.

Heat two was a humdinger with Kane and Pascoe locked in combat half a lap clear of the rest of the field. Pascoe led early but Kane emerged the winner, with David O’Keefe third.

Heat five produced plenty of drama with Pascoe’s race ending on lap 8 when contact with race leader Gavin Northfield pitched him into the turn one wall.

Northfield continued to lead from the restart until a kerfuffle in the final corner left him facing the wrong direction while Onley scampered home for the win. Ian Brims and Anning filled the minor placings.

Heat eight saw Roza home first ahead of Black and Pails before Wayne Brims wrapped up qualifying with a win over Kane and Pascoe in the final preliminary.

The Penrite Grid Draw saw Black select pole position, with Pails on the outside front row.

Roza and Ian Brims scored row two, followed by Wayne Brims and Campbell, with top qualifier Kane relegated to row four alongside Onley, who got a remarkable start and had advanced to second after just three laps.

However, a restart on lap four saw both Ian Brims and Pascoe scamper past Onley, who exited a couple of laps later with a flat tyre.

Pascoe hit the front on lap eight and sailed clear of the field to establish a significant advantage until a series of innocuous, but frustrating, spins from the tailenders changed the complexion of the race.

Kane had made steady forward progress to be fourth by lap 16, advancing to third on lap 21 and then second on lap 28. Despite Kane’s ominous presence, Pascoe still looked the likely winner until he bobbled exiting turn two on lap 38.

As Kane charged underneath and edged ahead, contact between the pair sent Pascoe into a spin and a subsequent rear-of-field restart and left Kane with a flat tyre. Black assumed control for the final three laps to lead home the fast finishing Campbell and the Brims boys.

The expat Kiwi led every circulation in the 20-lap feature race to lead home Brendan Palmer and Darren Vine.

The top three remained all but unchanged from the drop of the green, the only disruption to this order coming on lap three when Anthony Chaffey slipped ahead of Vine momentarily.

A strong finish from Grant Draney propelled him into fourth spot ahead of Rodney Harders, Michael Harders and Lance Towns. Chaffey was next in line after a spin cruelled his podium aspirations, with Chris Singleton and Tony Michelle completing the finishers.

Vine topped the scoresheets in time trials, clocking 13.991 and the only driver to drop below 14 seconds. Kendall, Palmer, Chaffey and Singleton rounded out the first five.

Mark George won the opening heat from Michael Harders and Ken Stanaway, with Rusty Whittaker acing the second heat over Michelle and Palmer.

Michael Harders trumped Whittaker and Chaffey in heat three, while the final heat saw Kendall outrun Vine and George to secure pole position for the feature race by the barest possible margin, finishing just one point ahead of Vine.