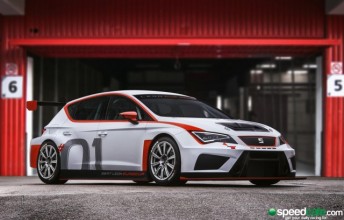 MEDIA RELEASE: SEAT is continuing its intense and long-standing commitment to motorsport as it prepares for the 2016 season of the SEAT Leon Eurocup to take to some of the continent’s most fascinating race tracks.

Two sprint races will be held on each of seven race weekends in six European countries.

On the starting line is the SEAT Leon CUP RACER, a top-flight motorsport machine with 330 PS and state-of-the-art technology.

It is already one of the most successful racing touring cars on the circuit right now, with more than 100 of them currently used across a diverse array of racing series by teams from 22 countries – with great success, including in the new TCR International Series.

The CUP RACER has been further developed in many details for the new season – for even faster and more thrilling motorsport. New for this season is a second version of the CUP RACER TCR.

With a sequential transmission instead of the DSG, it is specifically configured for endurance racing and all TCR championships.

“Customer sport is incredibly important to us. The CUP RACER has been an exceptionally high-performance and successful race car from day one. Nevertheless, we have systematically developed it for this season to make it even faster. And with the TCR version, we are now also offering a vehicle optimised for endurance racing,” says Dr. Matthias Rabe, Vice President of SEAT S.A. for Research and Development.

“We are looking forward to the new season. Seeing and hearing the enthusiastic SEAT fans at the track is always a fantastic experience. And we will once again be offering them some amazing and thrilling racing.”

The SEAT Leon Eurocup is equally successful, counting among the most attractive single-brand trophy series in Europe.

In this, its third year, the starting slots have once again been booked out for a considerable time.