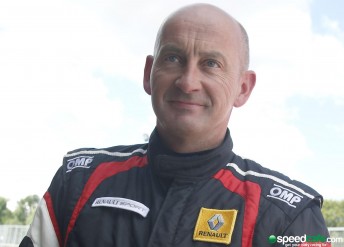 MEDIA RELEASE: Newcomer Darren Johnson (Kidderminster) says he is targeting wins in the Renault UK Clio Cup ‘Masters’ class after announcing he will contest selected events in this year’s championship with Team Pyro.

The UK Clio Cup’s Masters class is for drivers aged 38 and over at the start of the season which this year begins at Brands Hatch in Kent on Sat 2/Sun 3 April. All 18 races on the 2016 UK Clio Cup calendar take place at the British Touring Car Championship’s high-profile events – meaning huge trackside crowds as well as live television coverage on ITV4.

Johnson commented: “Work commitments mean I can probably only do Donington Park, Oulton Park, Rockingham and Silverstone although there could be more. There’s no way I expect to be challenging the younger guys at the front, but I hope to be the first Masters driver across the line on a few occasions. That’d be nice. I’ll still be attending the other events and am very much treating this year as a ‘recce’ for 2017.”

Johnson’s racing experience to date is limited although he has shown a fair turn of speed – he has used the older ‘third generation’ car that Josh Files drove to the UK Clio Cup title in 2013 to achieve class wins in Britcar and the Classic Sports Car Championship. There was also a strong one-off outing in the club-level Clio Cup Series in 2015.

He added: “I’ve loved driving it but now it’s time to step up to the real deal and the latest-spec fourth generation car for the UK Clio Cup. I’ve even bought the road equivalent – the Clio Renaultsport 220 Trophy – and it’s a cracking machine. I’ve actually got a Porsche 911 Turbo S as well but I prefer driving the 220 – it’s like a dart!”

Pyro Team Principal Mark Hunt said: “We’re all looking forward to working with Darren in 2016 – he loves his racing and is also a thoroughly nice bloke which always helps. He’s also going to benefit massively from working with our three ‘stars’ Mike Bushell, Josh Price and Senna Proctor so I’d expect to see improvements from him with every outing.”

Renaultsport’s UK Motorsport Championship Manager Will Fewkes said: “It’s really nice to see Darren adding to what is shaping up to be an extremely healthy grid for the UK Clio Cup in 2016 and hearing that he is already set on returning for 2017. He is an extremely amiable chap and, like any of our older Masters drivers, is I’m sure going to enjoy feeling 20 something again as part of the big show.”