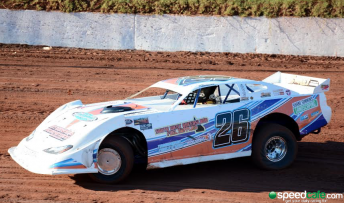 MEDIA RELEASE: Speedway sedan fans certainly have plenty of reasons to be excited about this Saturday night (February 20) at Ausdeck Patios Archerfield Speedway.

A full field of thundering V8 Super Sedans will take to Queensland’s premier speedway circuit with 25 drivers nominated for competition.

Not only is this the biggest field for quite a while, but it is also one of the strongest line-ups to do battle in Brisbane for several seasons.

With drivers from as far afield as Tasmania amongst the entries, along with a strong contingent from New South Wales and competitors from throughout Queensland, the scene is set for a great night of tin top action.

Headlining the field is current and two-time Australian Champion Matt Pascoe in what will be his first appearance on home soil this season.

Pascoe will continue his rivalry with another two-time national titleholder in Darren Kane, who won the previous feature race here last month and who, like Pascoe, has been one the standout performers in the category for several years.

In fact, it would be very hard to argue with the notion that these two have been Australia’s top two drivers for quite some time.

However, another driver who has emerged in recent seasons as one of Australia’s finest is current New South Wales champ Lachlan Onley.

Having finished runner-up at national championship level on three occasions, Onley’s inclusion on Saturday night will mean that Pascoe, Kane and the other 20+ drivers will need to be at their very best.

Of course, there are plenty of other contenders in the field including veteran Wayne Randall, who has numerous championship wins to his name and has probably won more feature races than the rest of the field combined.

Wayne Brims is always super-fast here at Archerfield, while the likes of Jason Campbell and Ian Brims are also consistent front runners.

Toowoomba’s Sean Black, who scored the biggest win of his career in Sydney earlier this season, will also be in the thick of the action, while Tasmanian hard charger Steve Latham is always exciting.

Gavin Northfield, Justin Smithwick and Bob McCosker are journeying from central Queensland for the event, while joining Onley and the Brims boys in representing New South Wales will be Darren Anning and Barry Towers.

Meanwhile, the Midgets have also secured a strong field for the latest round of the Polar Ice Track Championship, with defending champ Michael Kendall looking for a change of fortunes to reinvigorate his title defence.

Having campaigned a variety a cars in the early part of the season with limited success, Kendall is now back behind the wheel of his familiar #89, a car that proved super-quick in setting fast time during the World Championship event here last month before engine troubles forced him out of the feature race.

The five-time New Zealand champ will need to be at his best to see off the likes of Anthony Chaffey, Brendan Palmer, Brock Dean, Ken Stanaway, Grant Draney, Darren Vine, Queensland champ Michael Harders and young gun Rusty Whittaker, who has already collected two feature race here so far this season and might just prove to be Kendall’s biggest threat.

The Midgets have produced some spectacular racing so far this season and with a 19-car field taking to the track this weekend, there is no reason to think we won’t see another sensational showdown.

Also on the program are Junior Sedans, Stockcars and Ford vs Holden vs Sigma sedans, with early racing from 4.45. Super Sedans and Midgets will hit the track from 6.00pm and racing will be finished by 10.30pm.