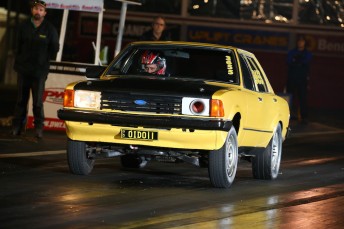 MEDIA RELEASE: Following a successful celebration of nostalgia drag racing at the weekend, Willowbank Raceway is now gearing up for the latest round of the Street Series this Saturday (15 August) – pitting local heroes and their street-based machines against each other for glory.

Last round’s Quick Eliminator winner and a potential candidate for the Street Sedan championship, Jason Stoodley is looking forward to a possible repeat of July success.

The 33-year-old’s focus at the moment is on winning rounds rather than the overall championship – remarking that if you’re winning rounds it will eventually come together, and stressing that consistency will be key.

“We have had a good run this season, even though we took last season off to re-power the car we are still learning what it needs to be consistent every time we race,” said Stoodley.

Taking the win the last round was one of many highlights for Stoodley in his 16 years of drag racing.

“Winning the round always feels good, the Street Series has some really tough competitors and to come out on top on the night is a good feeling,” said Stoodley.

“I’d have to say the final was one of the best races I’ve had in the series. Coming up against Josh I was struggling to keep the car over the 11.50 second limit. But in the final it’s all or nothing for me.

“So for me to get the win light by literally thousandths of a second was good for us, that’s for sure!”

This weekend Stoodley is hoping that the same formula will equal success with only slight tweaks to the car’s set up. Stoodley’s 1981 Cortina has been with him since his driving test, serving him well over the years with a previous series win.

“This is my first car, I did my driver’s licence test in this car. It started out running 18’s and now has progressed all the way down to 11.50’s!” said Stoodley.

Stoodley is employing a simple but effective philosophy for the weekend – “I will just go out and go rounds, and try to get as many points as possible.”

The championship hopeful makes note that the support he’s received from his family has aided his success.

“I would like to thank my wife, Sarah for all the support she has given me over all the years, and that I wouldn’t be anywhere near the front without all the help my Dad, Alan. So, thank you,” said Stoodley.