24 Hours of LeMons heads to Queensland for a weekend of fun, fumes and funky cars

24 Hours of LeMons heads to Queensland for a weekend of fun, fumes and funky cars 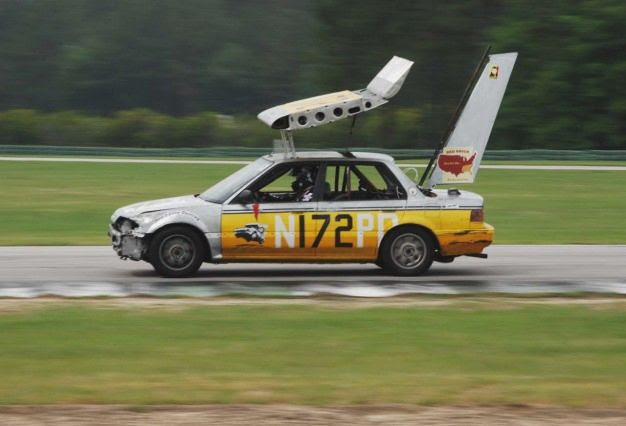 MEDIA RELEASE: Racing enthusiasts will be treated to a weekend of fun, fumes and funky cars as lighthearted motorsport event 24 Hours of LeMons heads to Queensland for the first time this year, taking over the Queensland Raceway from Friday 26th until Sunday 28th May 2016.

A parody of the long-running 24 Hours of Le Mans race and the concept of ‘lemon cars’, 24 Hours of LeMons is a series of endurance events created by San Fransiscan car fanatic Jay Lamm, who saw a niche in the market for a fun, inexpensive way for friends to build a racecar with all the elements and safety of professional circuit racing for a fraction of the cost.

Small teams will have the chance to compete over three consecutive days for 24 hours in cars that cost no more than $999 to purchase, and an unlimited budget for all the safety requirements as per the rules and Regs.

Now in its 10th year, 24 Hours of LeMons holds a Guiness Book of World Records title for most cars on a circuit for one race event and is renown for its lightheartedness, with teams and cars often dressed in outrageous and wacky outfits and given humorous names.

Brought to Australia by Sean Herbert, and Craig Claridge, 24 Hours of LeMons celebrated its first year in Australia in 2015 with a race in Goulburn NSW and with a multi race program in place for 2016 nationally.

With strict safety rules and a zero-tolerance policy for hoons, 24 Hours of LeMons is set to be a safe and fun day for all for a good cause, with the event also proudly supporting the Prostate Cancer Foundation of Australia.

General admission tickets for non-racers are $30 for the weekend and are available at the gate on the day. There are limited grid positions available on a first-in-first-served basis. To register your team head to www.24hoursoflemons.com.au