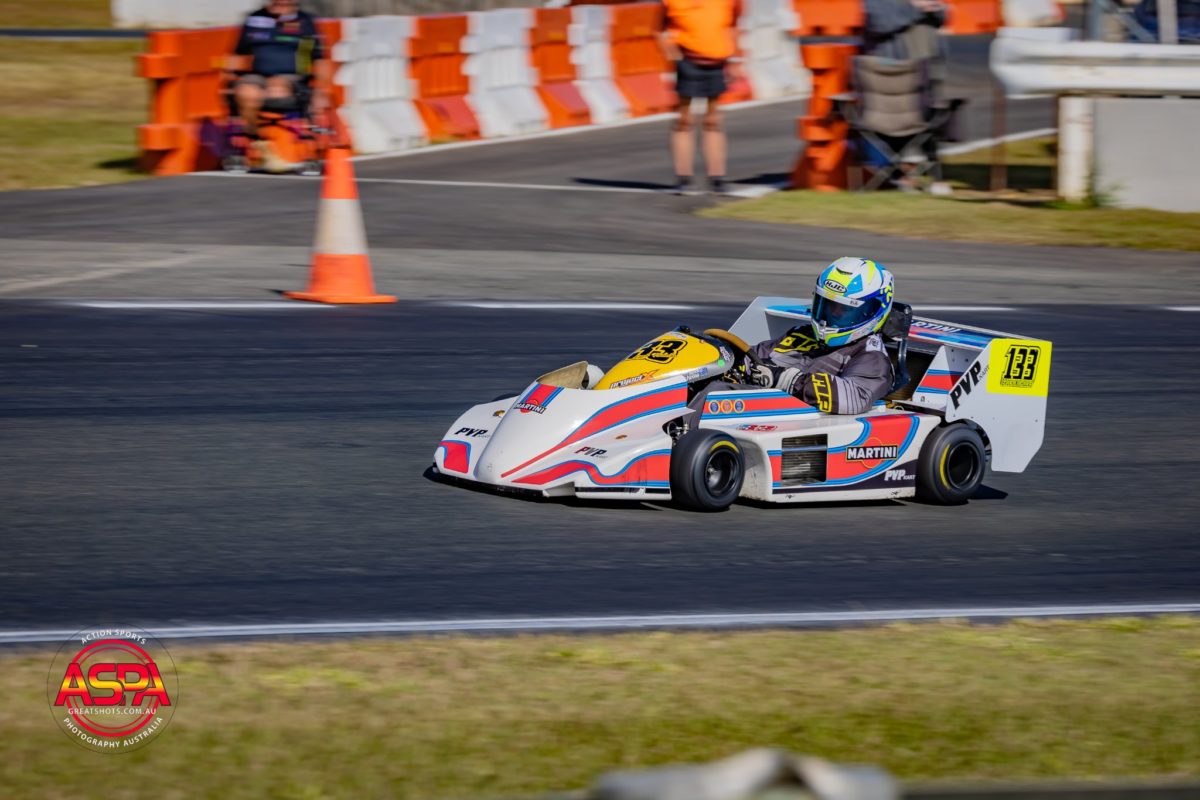 Beautiful sunny skies greeted competitors for Round 3 of the 2022 series and the club’s first visit to Lakeside in 2022.

Everyone was buzzing with excitement to see what changes had been done to the circuit since the start of the year.

Superkarts have various classes to suit all budgets from the 125 Non-Gearbox karts mainly using Rotax engines up the 250 International Class karts that can top out at 250kmh at places like Phillip Island and lap most circuits quicker than most other vehicles.

Well didn’t these guys put on a show.

Fantastic racing all weekend sometimes less than 1 second covering all three karts at the front.

He was tipped as the dark horse before the weekend and he’s finally done it, Paul Buckley finally beating Peter Nuske for the round win.

Although he nearly threw it away with his engine fouling up in the last race causing a DNF.

Ben had a ripper weekend with some brilliant driving to be mixing it at the front and becoming one of the regular fast guys in the class.

Ultimately just falling short of the top step of the podium but if he keeps this up it won’t be long before he stands on the top step.

Fantastic to see Drene back in a kart and grinning from ear to ear his passion for the club is second to none and at almost 68; he shows no signs of slowing down.

Unfortunately, his brother Chryss had ignition issues that stopped them from duking it out on track but there’s always the next round.

Russell punched out a 55.6 as his best over the weekend which is flying for a 125 kart, his pass around the outside of Lachlan Crisp at Hungary in Race 4 was a sight to behold. DNF in Races 3,4 and 5 cost him any chance at the overall win.

Doug melted a piston in Race 1 which is super unusual for him but after that he set PB after PB chasing Russell and the 250 karts ahead.

Race 4 saw him retire with a loose rear wheel. Race 5 would see him miss taking the overall win by just 0.09 of a second behind Steve Murray talk about tight.

With the Weier Family Racing machine out of action of Saturday due to an engine failure it left Lachlan and Steve to fight it out.

Lachlan quickly got to grips with the ADE chassis turning out some quick laps including a 55.9 and taking three out of five class victories to grab the overall win for the weekend.

Steve got his GAS GAS powered PVP chassis motoring to take the win in Race 2 and Race 5, but after missing Race 3 and starting rear of grid in Race 4 he had to settle for second.

This one come down to a count back with Ewen getting the overall win thanks to his Race 4 win.

Some great speed from these guys but also mixed in with some unreliability at times.

Ewen cracked a 54.2 in Race 4 on old rubber making him the quickest vehicle at Lakeside on the weekend.

Brock was not far behind cracking a 54.8 before a front power valve failure saw him DNF race 4 and unable to get started for Race 5.

The sight of a 250 International Superkart at full noise heading under the Bridge and down into Hungary always takes your breath away.

Fantastic to be back at Lakeside and see all the hard work that has been done to the place.

Find on social media under QLD Superkart to get the latest info from the club and see how you can join this amazing sport.

Big thanks goes to Action Sports Photography Australia for their support of the club with amazing images.