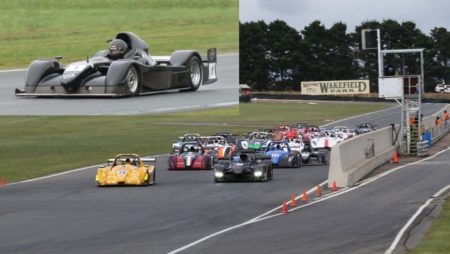 ROUND 1 REVIEW – THE BIGGEST FIELD OF SUPERSPORTS AT WAKEFIELD PARK

Twenty three Supersports racing cars, the biggest ever, lined up for Qualifying at Wakefield Park on Saturday the 26th of February for Round 1 of the 2022 Industrie Clothing New South Wales Supersports Championship.
Reigning Industrie Clothing New South Wales Supersports Championship Champion, Darren Barlow in his American built Stohr WF1, finished the weekend of racing on top of the points ladder after fighting hard against stiff competition from Peter White in his First Neon Radical SR8, and Alex Kenny in his Juno CN2015, and Aaron Lee in his West WR1000.

Ryan Godfrey demonstrated some impressive speed in his brand new Ready Set Reline Plumbing Wolf Tornado S by being second fastest at the end of Qualifying, against the multi-racing winning Peter White. Unfortunately some technical problems cut his weekend short.

In an ominous return to Supersports racing after a break of four years, seasoned campaigner Mark Brame finished on top of the Radical SR3 class, ahead of Kostinken Pohorukov in his Tilton Interiors Radical, and Brad Nielson in his Radical.

The New South Wales pointscore system now has Darren at the top with 43 points, Mark Brame and Peter White equal second on 42, Kostinken Pohorukov on 40, and debutante Aaron Lee next on 39 in his West WR1000.

Highlights of Round 1 of the 2022 Industrie Clothing New South Wales Supersports Championship include Alex Kenny’s drives from the rear of the grid in his Regulator Automation Juno CN2015 in Race 2 to eventually win Race 3 on the last lap, Steve Roberts third place Qualifying performance in his Austwide Freight Radical SR8, and the appearance of GT legends Ash Samadi and Andrew MacPherson in their new Radical SR3’s.

The diverse combination of exotic British Radical SR3’s and SR8’s, and European Wolf’s and Juno’s, and American West’s and Stohr’s, make Supersports possibly the most interesting and challenging racing categories, with a bigger field expected at Sydney Motorsport Park for Round 2 on April 9.