The 944 Challenge kicked off their 2020 season this past weekend at Sandown raceway with a strong field of 19 cars in attendance for the event, which was proudly presented this round by Smiths TMP. 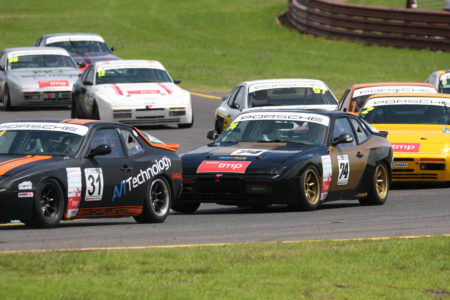 Taking Pole position on a drying track was Jamie Westaway in his new car, from reigning champion Cameron Beller with John Kennedy third and Dick Howe fourth after the session came to an early halt when the car of Toni Andreevski lost an oil line and sent his car into the grass and gently into the turn 2 tyre wall, causing dramas with others spinning off as a result. Rob Holding was fifth ahead of Tony Westaway and Marius Catrina, with Adam Brewer and Mark Taubitz next, while Andreevski’s time was good enough for him to qualify tenth.

In Race 1 Beller was able to take the victory after a battle with Westaway, who crossed the line in second place, with Kennedy rounding out the podium. There was a gap back to the next battle which was led by Adam Brewer in fourth position, with Tony Westaway, Rob Holding and Mark Taubitz having diced for the majority of the event. Andreevski was able to get his car repaired for the race and finished in eleventh position ahead of Dick Howe who spun coming onto the front straight on lap 1 and slipped down the order. Pedr James was unlucky to receive the lightest of touches in turn 3 and spun, doing a great job not to get bogged in the wet grass – but dropping back to last.

Beller got himself into the lead at the start of Race 2 ahead of Kennedy and Jamie Westaway, with Brewer next ahead of Taubitz who moved up to fifth at the start. It all went wrong for Jamie Westaway though, when he spun entering Dandenong Road, with Brewer getting caught up in the drama and both slipping down the order, Brewer to eighth and Westaway to last. Kennedy was trying hard to stick with Beller and had a moment on lap 5, looping his car and kissing the turn 3 guardrail and dropping him to the back of the field, promoting Taubitz to second position. Howe moved his way up to third position before encountering some throttle issues and slipped back to sixth at the finish, losing to Michael Westaway who rounded out the podium from brother Tony Westaway, with Adam Brewer stealing fifth position from Howe on the run to the chequer. James had a great drive up to seventh from the back along with Jamie Westaway next in eighth, Rob Holding and Toni Andreevski rounding out the top ten, with John Vainoras suffering a DNF, along with the two Andy’s, Jones & Tudor, both suffering from broken exhausts! Must be something about the name thats exhausting…

The final race saw a drag to turn 1 between Beller and Taubitz, with the #1 car of Beller staying in front, with Brewer up to third after a fantastic start. Both the lead cars had a moment at Dandenong Road, with Taubitz slipping onto the grass which allowed Brewer ahead, with Howe also moving past Taubitz on the run down the front straight. Howe moved past Brewer on lap 2 and looked to challenge Beller before the safety car boards appeared for the beached car of Keith Marriner in the Dandenong Road sand. There was a cluster of Westaways surrounding Pedr James in positions 5 through to 8 with Catrina and Holding rounding out the top ten, and Kennedy right behind in eleventh.

Upon the restart Jamie Westaway and Kennedy moved ahead while Howe attacked Beller for the lead. Taubitz slowed on lap 6 when his car stuck in gear, and dropped to the back of the field to circulate slowly for the last 3 laps. Jamie Westaway moved up to fifth before he also slowed with car issues and pulled in to retire, which saw Tony Westaway now up to fourth with Michael behind him. Up front, Howe was unable to challenge Beller who won by a second to take a clean sweep of the round, with Howe next from Brewer. Tony Westaway was next with Kennedy moving up to fifth on the final lap. Michael Westaway was next from Catrina, James, Rob Holding and Tim Wolfe rounding out the ten after coming from the back of the grid in his new car.