2018 set to kick off for Paul Feeney Group Race Team

2018 set to kick off for Paul Feeney Group Race Team 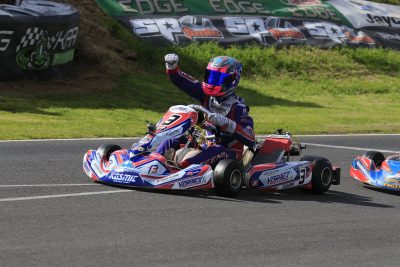 Season 2018 gets underway for Paul Feeney Group Race Team with seven competitors lining up in numerous categories in the SP Tools Australian Kart Championship, presented by Castrol EDGE at Monarto in South Australia this weekend.

The team has been buoyed heading into the new season by the announcement of two new sponsors. Globally recognised racing fuel brand, VP Racing Fuels have joined the program, whilst blockchain financial technology startup, Labrys has joined long standing sponsors Penrite Oil who have re-signed for this season, Bridgestone Kart Tyres and Vortex Race Engines.

Early season testing and competition has shown some strong results already for the PFG Race Team, with all seven members confident heading into the first of five rounds.

Leading the charge will be two drivers in KA1. Queenslander, Mat Stenner re-joins the team in 2018 after a successful 2017 season. He will be joined by reigning KA2 Junior Champion – Broc Feeney – who will twin his season in the new Vortex DVS SV powered category with the national Toyota 86 race series.

Last weekend, Broc was honoured at the CAMS National Motor Sport Awards for his 2017 Junior Championship.

Jarrod Hughes and Connor Roberts have proven sharp in testing and are looking to get their Championship runs underway.

With the Championship-winning knowledge of the PFG team, Hughes and Roberts have the best possible armoury underneath them to fly the flag for PFG in Australia’s elite junior category this season.

A welcome addition to the Paul Feeney Group Race Team is talented New South Welshman, Jackson Souslin-Harlow. After a successful Junior career, Souslin-Harlow has made the move to KA3 Senior this season.

He will benefit from the tutelage of Tyler Greenbury – a multiple Australian Champion behind the wheel and the spanners – who recently announced he will be making his full season debut in the Supercars Super2 Series this season.

Completing the PFG Race Team line-up for 2018 will be siblings Ethan and Maddie Feather in Cadet 12, which utilises the Vortex Mini-Rok engine.

After a solid off-season of training, both drivers – entering their second full season in the SP Tools Australian Kart Championship – aim to be toward the front of the field. Maddie will make the move to Cadet 12 after last year competing in the Cadet 9 category.

In events he’s raced in so far this season, Ethan has been posting some strong results, including third at the National Rotax Pro Tour event in Melbourne over the Australia Day weekend and last weekend winning the Warwick (QLD) Club Day – where Maddie posted an excellent sixth placing.

Sunday’s action will be livestreamed via www.karting.net.au. Updates throughout the weekend can be followed on www.facebook.com/australiankartchampionship and live timing at http://speedhive.mylaps.com.

Updates relating to Paul Feeney Race Group Team can be followed at www.facebook.com/paulfeeneygroupraceteam.