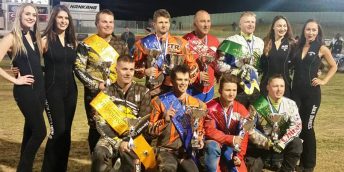 The highly anticipated 2018 FIM Oceania Speedway Sidecar Championship will again be hosted at South Australia’s Gillman Speedway (Adelaide) Saturday March 31 2018, as part of the 2018 Festival of Speed at Gillman. The prestigious three wheeled international show down will feature the world’s best Speedway Sidecar competitors and teams duke it out for coveted 2018 FIM Oceania line honours.

Gillman Speedway Manager, Dave Parker was excited to share news of the Easter long weekend event; “We are thrilled to once again be hosting the FIM Oceania Speedway Sidecar Championship that will see world famous riders and passengers from New Zealand, United States of America and the United Kingdom come out to go for the 2018 title. They all treat this event as one of the biggest on the calendar.

“Only the top riders get picked by their Federation Representative (FMNR) based on the previous years’ title winners and finishers, that will pretty much guarantee the top four riders and teams.

“Australian teams are highly competitive on a world scale, and will be the ones to beat. The Kiwi riders are deadly serious about the competition and are leaving their machines over here to train as much as possible, because they realise that they cannot just come over and only race in one event to be competitive.

“The 2018 Festival of Speed at Gillman Raceway will kick off on Good Friday with a Free ‘Family Fun Day’, where we will have many classic vehicles and motorcycles on display. Anything to do with racing really, from early and late models, sprint cars, speedway cars and bikes, go-carts, even remote control cars, but predominantly speedway orientated. Last year we even had monster trucks! There will also be jumping castles and face painting for the kids which is of course, free!

“We usually get round 3,000 people through the gates on Friday and they come back over the course of the weekend. The Festival of Speed is a three-day event. Gillman Raceway fans will have a great view of the track from where ever they are seated and will have full enjoyment of a world class stadium,” Parker finished.