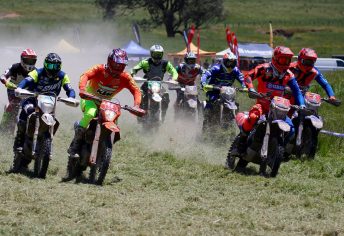 Motorcycling Australia (MA) advises that the 2017 Yamaha Australian Four Day Enduro (A4DE) will run in a slightly condensed format to not include a Prologue when the illustrious A4DE takes place at Toowoomba, QLD 26-30 September 2017.

Prologue has served as the seeding order system for the event since 2012. This year, however, will see the order determined at preceding A4DE or Yamaha Australian Off-Road Championship (AORC) rounds. It is highly recommended that potential and definite 2017 A4DE competitors; take part in one or more 2017 Yamaha AORC rounds, as results will be used as a guide to seed riders for this year’s A4DE.

The A4DE event will still include a scrutineering/sign on day and four days of competition now officially beginning on 26 September. The revised A4DE format will allow riders and teams to keep costs down, maintain optimal track condition, encourage international participation, avoid unnecessary injury and avoid extra parts and maintenance on the bikes.

The A4DE is one of the most fiercely contested Off-Road events of the year and features a completely unique format compared to most enduro competitions.

Anticipation for this year’s A4DE is at an all-time high as the event attracts Australia’s best enduro riders and top international talent as one of the premier enduro events.