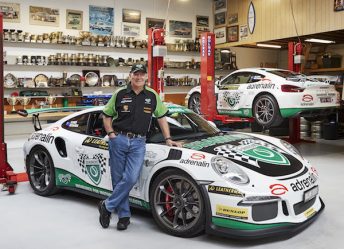 The launch is kicking off what is set to be an exciting year for the series, which has grown its event portfolio from two events to eleven in recent years that includes Quit Targa South West, GT Fabrication Targa Bunbury Sprint, Quit Targa West, Targa City Sprint and the Shannons Targa Rallysprint Series.

In the heart of Kalamunda during the popular night markets on Friday 17th February, the Targa season launch will include a free vehicle display on Haynes Street from 5.30pm to 8.30pm and an exclusive launch party in the evening to conclude the formalities.

The vehicle display has something for both young and old motoring fans who can look forward to seeing classic Mustangs next to exotic cars, and Ford Escorts next to Holden HSV’s, Mitsubishi Evo’s and Subaru WRXs.

Drivers and event organisers will be on hand to answer questions about the competition vehicles, Targa events and to offer advice and direction to those who are looking to get started in tarmac rally either behind the wheel or officiating.

Targa West event director Ross Tapper said he is looking forward to sharing the excitement of tarmac rally with the wider community.

“We encourage families to wander through the vehicle display and enjoy the vibrancy of the Kalamunda night markets,” Mr Tapper said.

“This is the 13th year for Targa West, and with the expansion of our event portfolio, the addition of an Western Australia tarmac rally series – the WA Quit Targa Cup, the continued support from sponsors Healthway and Shannons Insurance and the addition of the new Targa Tour touring category, we’re confident of another fantastic year.

“The Targa Tour, which runs alongside Targa West, is open to all cars and is a great and cost effective introduction to Targa events – it’s a spirited drive behind a lead car at 15 second intervals. All you need is a helmet and car!

“We have a two day Targa Rally and a one day Targa Tour to make it easy for new competitors to easily enter the events at low cost to see if it is the sport for them.

“The Malaga Stage of Targa West on Sunday morning [13th August] will have increased entertainment for motorsport fans – drift cars will put on a smoking showcase of sideways action in between runs of the rally cars.

“As far as the season goes, it’s important to note that we’ve created more events under one series – the Quit Targa Cup – and this has given competitors who have invested in their cars an opportunity to compete in a variety of events.”

The 2017 Targa season will start with the Quit Targa South West, which will see competitors participate in a two-day rally program on closed roads through the stunning Manjimup and Pemberton regions on 19 – 21 May.

The 2017 Quit Targa West is proudly sponsored by Healthway and the Quit message.