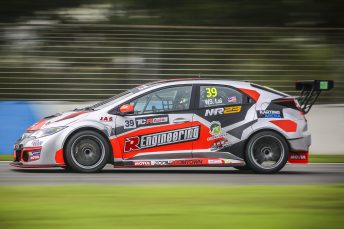 After an almost two month break, the 2017 TCR Asia Series fires back into action at Shanghai in China for another ‘double-header’ event, this time with the recently introduced TCR China series.

12-months ago Shanghai laid the foundations from which Liqui Moly Team Engstler’s Andy Yan went on to claim the 2016 driver’s championship after dominating both races at his ‘home’ circuit and the Hong Kong-based driver will be back this weekend driving an Audi RS3 LMS TCR for New Team Faster, but whilst he will be a favourite for the outright win, don’t discount the resurgent Tin Sritrai!

Sritrai claimed back-to-back wins during TCR Asia’s maiden visit to the streets of Bangsaen in Thailand, in the process the local hero moved to within four and a half points of championship leader WS Lai, whilst new Liqui Moly Team Engstler recruits Diego Moran and Kantadhee Kusiri also put themselves back in the title hunt, with just 18 points separating the top four ahead of the penultimate event of the season.

With almost a dozen entries in each championship, the field will present a huge challenge to both categories, especially as many of the drivers have competed wheel-to-wheel in the past, but in both cases they need to remain mindful of the fact that they’re battling for two different championships – the winners of each series awarded full points.

Having debuted with his new team at Shanghai just three weeks ago, Yan’s winning streak in a TCR car continued, the Audi driver claiming two wins from three starts (TCR China contests two short sprint races together with a longer 60-minute compulsory pit stop final race) to start arguably the favourite at a circuit on which he is considered a formidable opponent.

That said, Team Thailand’s Tin Sritrai has vaulted back into TCR Asia title contention after his two Bangsaen wins – making his tally three wins for the season – the Honda driver is campaigning arguably the quickest marque in the field and his form is also at its peak, he could well return a favour to Yan for the defeat the Hong Kong driver dished out to him in season 2016.

Likewise Kantadhee Kusiri. The young Thai star stepped into Yan’s shoes this season to take up where the reigning TCR Asia Series champion left off – with victory – but it has been a tough haul for the Volkswagen driver since then, his high profile start-line incident during Bangsaen’s opening race a good indication of just how challenging the year has been since that season-opening victory.

Leading the charge coming into Shanghai is Malaysia’s WS Lai, the R Engineering Honda driver is yet to record a round win this season, despite amassing podium results in every event so far, and he is desperate to right that wrong, something which perhaps cost him during Bangsaen’s second race where a split second decision to make a move around race leader Jasper Thong saw them both in the barriers.

That created quite a deal of discussion up and down pit lane afterwards, with the Honda driver carrying a penalty as a result into the Shanghai round but whilst he may approach the incident differently if he had his time again, the result of the event saw both he and Thong fail to score vital championship points.

Whilst there are just 18 points separating the top four drivers ahead of the Shanghai round, TCR Cup title rivals Abdul Kaathir (R Engineering Honda) and Jasper Thong (Audi Hong Kong Audi) are not far behind, AK just 10 points behind Kusiri with Thong another 15 points further back, but with 100 points still on offer over the final four rounds of the year, it’s a long way from over.

During the first six rounds of the 2017 TCR Asia Series season, it was a tight affair between the top teams, with six different winners across the first six rounds, but Bangsaen changed all that with Tin Sritrai going on to become the first multiple winner of the season.

Bangsaen ultimately was the event that has shaken up the 2017 season, the drama of the opening race which saw contact between pre-race favourites and front row qualifiers Kantadhee Kusiri and Sritrai causing chaos which had an affect on much of the field, whilst the late race contact between WS Lai and Jasper Thong over the lead in race two saw the two title contenders in the barriers recording zero points as a result.

Traditionally Shanghai has been kinder, the wide open Formula One layout allowing more room for drivers to move and effect a pass, but it can also mean more contact as slip-streaming can also play a part in performance.

As for what the TCR China competitors will bring, certainly they will bring a challenge to the TCR Asia regulars who will do well to remember they’re not fighting their Chinese rivals for points. For drivers like Terry Huang and Filipe de Souza they will make a return to competition against the TCR Asia regulars after cameos in Zhuhai, and both drivers made the podium on their TCR China debuts so will be right in the mix.

Who to watch out for

Clearly the form driver in TCR Asia at present is Tin Sritrai, the Thai driver making up for a string of technical challenges last season which kept him from taking the fight to TCR China points leader and reigning TCR Asia champion Andy Yan.

Yan though will have an impact on the result, of that you can be sure, the new Audi recruit won two of three races at Shanghai during the opening round of the TCR China series just three weeks ago.

He – like Kantadhee Kusiri, points leader WS Lai, Abdul Kaathir and Douglas Khoo have been busy turning laps in a variety of categories since Bangsaen, so – are race ready, but Yan has been busy behind the wheel of a touring car, and that my prove the key to victory in the two races where the fields compete for the same piece of tarmac.

As for the TCR Asia Series title, discount WS Lai at your peril. The Hondas have been steadily improving all season and are undeniably fast over a single lap. The Malaysian is desperate to win a round feeling that a championship win without a journey to the top step of the podium would be a hollow victory, so keep your eyes on the #39 Honda..

Likewise, don’t discount 2016s most successful team – Liqui Moly Team Engstler. They know how to win races all over the globe in TCR competition, and they were convincing winners last year. Their season started brilliantly, and until recently Diego Moran was the championship points leader so they are still within reach to back-to-back titles.

With two events in China, the European based operation are keen to go out fighting, and with two proven race winners on the driver roster, this weekend could be the start of their return to form!

The TCR Asia Series will return to Shanghai for just the second time in three seasons, the home of the Chinese Formula One Grand Prix seeing Andy Yan dominate the two races 12 months ago to effectively put the championship out of reach for his rivals. Yan will be back in 2017 heading the TCR China assault, the multiple China Touring Car Champion though will face a resurgent Tin Sritrai who holds the record of fastest man around Shanghai in both qualifying and race trim.

How things played out last time at Shanghai