2017 Radical Australia Cup title to be decided in New Zealand

2017 Radical Australia Cup title to be decided in New Zealand 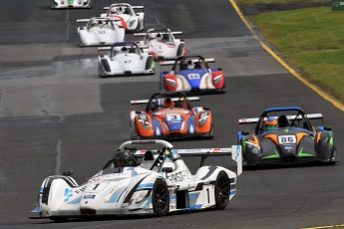 New Zealand’s Highlands Motorsport Park will be the scene of the final event of the 2017 Radical Australia Cup, a season which will once more come down to the wire at the popular South Island circuit, with 2016 title rivals Peter Paddon and Oliver Smith again in contention for the coveted title.

Effectively Paddon has his third-consecutive Cup title well within his grasp after taking a season-high seven wins from eight starts to be 64-points clear of Smith with 93-points still up for grabs at Highlands (including pole and fastest lap points).

For Smith, who has been winless in season 2017, five podiums from eight starts has kept him in the title race, and whilst he knows he will have a difficult task ahead at Highlands, he’s also well aware that anything can happen – something Peter ‘Perfect’ discovered during the second race at Phillip Island earlier in the year, his perfect record impacted by a spin off the start which put him hard into the barriers on the main straight.

That said, Smith – and the rest of the Radical Australia Cup field – are also fully aware that there has only ever been one winner at Highlands in a Radical SR3.. his name, Peter Paddon..!

Added to the 2016 Radical Australia Cup program as the final event of the year, Highlands was an instant hit with the series regulars, and they were all quick to sign up for this years event, although Paddon very nearly missed the round with the pending birth of his third child.

The mighty Radical SR3s were suited perfectly to the nature of the Highlands circuit, with Paddon’s pole time just over a second off the pole-sitting 600-horsepower twin-turbo V8 McLaren of experienced New Zealander Craig Baird from the Highlands 101 GT3 event, whilst in the race, Paddon’s best was just nine tenths of a second slower than the thundering 6.3-litre V8 Mercedes-AMG of Dominic Storey.. numbers which really put the lightweight open cockpit 1500cc naturally aspirated 4-cylinder SR3 into a whole new perspective.

Unlike season 2017, the 2016 Highlands event featured three shorter races, and whilst Paddon was clearly the standout, Oliver Smith sadly lost his championship lead after contact in race two when running at the front, whilst Kim Burke pushed Paddon all weekend, leading up until the final corner of the final race to ensure that Paddon’s second championship crown was hard fought all the way to the dying stages.

Both Smith and Burke will be back in 2017, and as podium finishers last year, both will be looking to break Paddon’s winning streak, as will Vantage Freight’s David Crampton who will be back behind the wheel of his new SR3RSX after it was badly damaged in a state round mid year. Crampton admits that recent testing has him fired up for the season finale and he will be looking to add to his podium finish from Sandown earlier in the year and make his presence felt ahead of a full title assault in 2018.

They won’t be the only drivers to return to Highlands, with Bill Medland, Rowan Ross and Phil Anseline (who made the podium in 2016) back again, as is RA Motorsport’s Chris Medland who will be looking to build on his season-high second placed finish last time out at Sydney Motorsport Park.

For season 2017, there will be five drivers new to the New Zealand circuit, including experienced RAC campaigners Tony and Simon Haggarty and Sue Hughes, whilst Peter Johnston – who was an impressive second earlier in the year at Phillip Island – and Peter Clare, will also be making their Highlands debuts.

Action at Highlands will begin on Friday with two official practice sessions, ahead of qualifying and the first 50-minute race on Saturday, then the final event of the 2017 season on Sunday morning (NZDT, GMT+13).

You can keep up to date with the action across the weekend, through the Radical Australia Facebook page; www.facebook.com/radicalaustralia