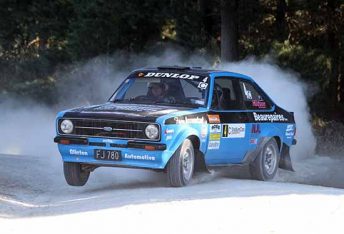 MEDIA RELEASE: The competitive route for the 2017 Otago Rally has been finalised, with an exciting mix of new stages and old favourites that is sure to impressive competitors and spectators alike.

To be held from April 7-9 next year, the Dunedin based event will once again be round one of the New Zealand Rally Championship, and will incorporate the popular International Otago Classic Rally, and a separate Allcomers event.

After a pre-event ceremonial start in Dunedin’s Octago on Friday, April 7, the route for the Otago Rally will take drivers over 14 special stages on Saturday and Sunday, with a competitive distance of nearly 285 kilometres.

The stages will all be run in daylight, with day one based around Lawrence, using roads that will be familiar to those that competed in the 2014 event.

A new 40km fast public road stage will test crews, while stages in the Glendhu Forest (roads not rallied on for at least 30 years) will offer a different character to the event, with tighter and more technical roads.

The opening day finishes, as always, with the exciting tarmac stage around the streets of Dunedin.

Clerk of Course, Norman Oakley, unveiled that the second day of the rally would be a more traditional one, held closer to Dunedin.

“Day two will be based in Waihola using favourite stages including Whare Flat, Waipori Gorge, McIntosh Road and – of course – Kuri Bush.

“A feature of this day will be the inclusion of a 55km monster stage in Berwick Forest that will start and finish on fast public roads, but which will contain a middle section of some typical foresty roads. This stage may decide the event,” Oakley said.

With unprecedented interest in the New Zealand Rally Championship at present, the 2017 Otago Rally is likely to see up to 10 different brands of car contesting the rally, including a new AP4-spec Holden Barina for former V8 Supercars star, Greg Murphy.

A guest international driver for the Classic Rally is still being negotiated, with details to be announced in the coming month.

The ‘intention to enter’ form is already available to download from the event website, while other event information will be added early in the new year.

For further details on the Otago Rally, go to www.otagorally.com