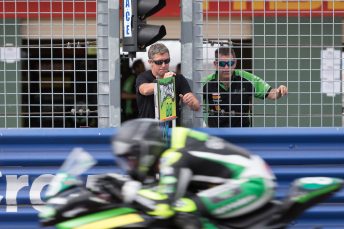 The Hi-Tec Batteries Australian Supersport 300 class riders battled the heat during Round 4 of the 2017 Yamaha Motor Finance Australian Superbike Championship presented by Motul Pirelli (ASBK) over a week ago. With near capacity grids, we take a quick look at the rising stars in the ever popular class.

The Hi-Tec Batteries Supersport 300 class is arguably one of the most exciting and thrilling of ASBK. With handlebar-to-handlebar racing and strong manufacturer support, it’s a great stepping stone to the higher capacity classes being the Motul Supersport class (600cc – 700cc) and the apex of road racing in the country; Yamaha Motorcycle Insurance Superbike class (1000cc-1300cc). The 300cc class is truly a showcase and breeding ground for the Aussie stars of tomorrow.

Oli Bayliss (Cube Racing, Kawasaki EX 300), son of three time World Superbike Champion Troy Bayliss, is making a name for himself in his own right in the 2017 ASBK. This is Oli’s first full year in road racing and with his father’s guidance, the 13-year-old has chosen the Supersport 300 category to hone his racing skills and learn his family craft.

Bayliss was ecstatic to take a win in the ‘Up to 300’ class knowing he was not far off the pace of the outright Hi-Tec Batteries Supersport 300 winner for the combined ‘Up to’ and ‘Over’ categories. He took a pole position and three race victories for his ‘Up To’ category at Round 4 in Darwin.

“I’m really happy to get three out of three wins for my class,” Bayliss commented. “All that matters are the points for the championship. The team has done really well, so I just want to say a massive thanks to all of the guys and it should be good for when we head to Morgan Park next month, that’s for sure.”