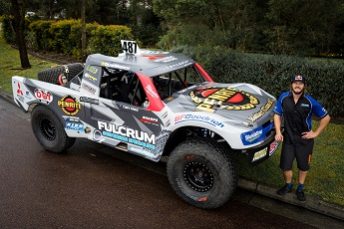 Melbourne, AUSTRALIA June 8, 2017 – The 2017 Tatts Finke Desert Race gets underway this weekend in Alice Springs with the auto Prologue starting at 8am. The iconic off-road event which first took place as an all two-wheel affair in 1976, marks Round 2 of the BFGoodrich CAMS Australian Off Road Championship. This year also celebrates the 30th running of the auto category and sees a start grid over ten times larger than the original 12 cars, who first contested the four-wheel category back in 1988.

A mixture of huge suspension travel and horsepower make the specialised off-road buggies, trophy trucks, 4WDs and SXSs in action on the event represent the pinnacle of endurance racing in the Australian bush. The punishing desert terrain demands the most from all the equipment on offer, especially the tyres and is characterised by sand hills, rocks and famous Finke whoops.

Flying the flag high for BFGoodrich Tires at Finke will be four-time King of the Desert and eight-time AORC Champions, Shannon and Ian Rentsch in their #33 SR Racing twin-turbo V6 Jimco Pro Buggy. The Victorians arrive in Alice Springs with form under their belt after winning the Sunraysia 400 in April. In close attendance will be fellow BFGoodrich competitor, Travis Robinson, fresh from victory at the opening round of the 2017 AORC in St George. Robinson will have an elusive first King of the Desert Title in his sights as he points the #13 OBR Jimco towards Finke on Sunday morning.

While the Pro-Buggies have had the upper hand in recent years at Finke, the Extreme 2WD Trophy Trucks have been snapping at their heels. In 2016, Dakar Champ Toby Price and Beau Robinson duked it out their BFGoodrich-shod Geiser Brothers Trophy Trucks to finish second and third on the podium. The pair have returned to the red centre this year, again on BFGoodrich boots, to settle some unfinished business.

The field of 140 cars also includes 57 SXS’s, a class which has boomed over the past five years. Headlining for BFGoodrich team line-up is reigning SXS Australian Champion, Cody Crocker in his #619 Polaris RZR Turbo along with teammate Simon Evans. The Polaris pair’s biggest competition will be from fellow BFGoodrich competitor, Dan McKenzie, who will hoping to replicate his class-winning short course form to the desert, when he unleashes the naturally aspirated Yamaha YXZ1000R in the Superlite A class.